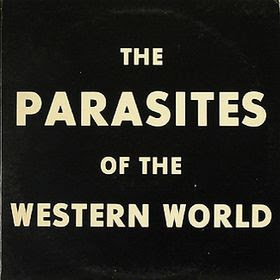 Thanks to Jakob Olausson for including Parasites of the Western World on his list for Dusted... I'd never heard of it before, but it's a self-released LP from 1978, two guys from Portland, Oregon making grandiose prog punk inside the cupboard under the kitchen sink, right next to the windex. Actually, Olausson's quip about filing it between Eno and the Electric Eels sums it up pretty well, tipping towards the Eno side and heavy on the symphonic synth-led instrumentals, but with a ragged blasted quality that especially comes out on the tracks with vocals. There is also a track called "Electrokill." Co-worker plays a lot of early Chicago electric blues like Muddy Waters and Hound Dog Taylor... the other day I was walking by his desk during "I'm Gonna Move Right In" from Another View and with the sharp clean-tone lead guitar and driving backbeat I just figured it was another Chicago blues rave-up until he told me who it was. And from blues/rock hybrids to jazz/rock hybrids, the Circle album is the de facto In A Silent Way tribute they put out on Last Visible Dog early in 2007, and it sounds even more sublime than ever. I can never get enough of the electric piano...
Posted by Larry at 7:28 AM