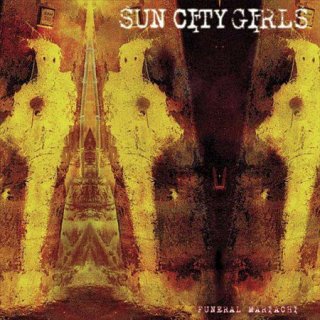 1. SUN CITY GIRLS Funeral Mariachi LP/CD (ABDUCTION) I feel like the guy who cried wolf here, because as you may have noticed I like everything Sun City Girls do, even their terrible albums, and I always say so, but this time I REALLY LIKE WHAT SUN CITY GIRLS HAVE DONE. In fact, I think Funeral Mariachi can finally give Torch of the Mystics a rest and take its place as The Great Sun City Girls Album. Or at least the most recommendable Sun City Girls album; whether or not Mariachi is better than Torch is an apples-and-oranges comparison, but there is no doubt that Mariachi is, as the press release says, more accessible. A good 30 of its 40-odd minutes could be described as some sort of Italian-soundtrack MOR-music mood piece, made up of tracks that could possibly be played in a grocery store, or a dentist's office, without anyone present doing a double take. This is not a bad thing, and the reason is that it is done beautifully, and invested with unbelievably sincere emotion. After all, the album was conceived as the band's final album; it was begun a couple years before drummer Charles Gocher passed away in 2007, then finished a couple years later by the surviving Bishop brothers and associates, and cry-wolf be damned, the band has done a perfect job of creating this farewell. It's like their whole career of evil, all the confrontation, provocation, and outright shrieking, has been one long set-up to the final joke, which was to drop the masks and calmly and seriously record one of the most beautiful post-punk albums of all time. "Ben's Radio" is an incredible opening song, but not characteristic of the whole album. It's comical, jagged, and uptempo, the closest thing on here to their history of gnarly pranksterism, and it is followed by a couple more relatively feisty numbers (a triumphant song called "The Imam," which they were using as an opening segue into "Kickin the Dragon" on the Brothers Unconnected tour, and "Black Orchid," which kind of sounds like a sequel to "Cafe Batik" off of Torch, sorry to non-headz for the details), but at that point Funeral Mariachi begins to spread out and expand into the aforementioned Mediterranean beach-resort-in-heaven dreamland, with a widescreen lushness that is beyond any fidelity they have previously achieved, including such terrifically recorded albums as Torch and 330,003 Crossdressers From Beyond The Rig Veda. In fact, the way this album is arranged and performed is closer to something like Pet Sounds than it is any previous Sun City Girls album. It seems like a mostly instrumental album, but at the same time there are a lot of vocals; another song with clear lead vocals emerges on Side Two, called "Holy Ground," and I can say without hesitation that it is the greatest English-language song this band has ever composed. I mean, it's just that kind of album. I could sit here and draw superlatives from it for probably another 500 words, but I'll stop. All you have to do is go get it, in an LP edition of 500 (Forced Exposure still has some as of this writing, October 24), or in a nice non-jewel case gatefold CD edition of 1000.
Posted by Larry at 9:32 AM 1 comment: