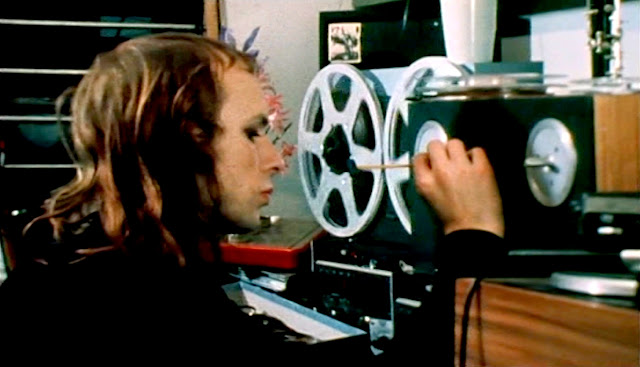 I don't know if it's still up on YouTube or what (it keeps getting taken down), so I won't bother linking, but if you come across it, you should watch it. A few salient notes:

2. I like his genre coinage "insane rock" to describe the Velvet Underground.

3. Man, Paul Thompson was a great drummer in Roxy Music, as this excerpted live performance of "Re-Make/Re-Model" from 1973 (Olympia Theater, Paris) amply demonstrates. (Fascinating side anecdote from a late-70's Eno interview with Lester Bangs which, like this film, I didn't know existed until today: "To get a drummer we auditioned 130 drummers, and it came down to two people in the end. One was a guy named Charlie Hayward who played in Quiet Sun, which was Phil Manzanera's first band. He was a very technical sort of drummer with a lot of interesting ideas; he had a drumkit that was made apart from ordinary drums, it had all sorts of junk inside it, like a van Tieghem type of thing only on stands so he could play it. So it was a choice between him who was very light and Paul Thompson who's very very heavy, and we went for Paul, because we decided that with the instruments we already had quite enough etheria, we needed some kind of heavy anchorage. And I think that was quite the right choice as well. I think if it hadn't been for Paul, who is always quite the overlooked person in Roxy, it would have been just another arty band." I had no idea that Hayward was that close to being the original Roxy drummer!)

4. Eno's briefly appearing costume designer Carol (McNicoll) seems rad with her dyed red hair. Turns out she's very rad indeed. Her main medium is ceramics ("mainly non domestic slipcast ware"), with which she exhibits and lectures internationally to this day. At the time of Warm Jets she was Eno's girlfriend and designed his trademark black cockerel feathered boa collar, as well as supervising the fabulous cover for the LP (in which one of her teapot designs can be spotted amongst the clutter).

5. Apparently "The Heavenly Music Corporation" from Fripp/Eno's (No Pussyfooting) was recorded the first time they ever played music together. No pussyfooting indeed!

6. I can't believe that dude's stage name was Busta Cherry Jones. You might know him from his brief tenure as co-bassist with the Talking Heads' Remain in Light band. No wonder Tina wanted him out, trying to take her job with a name like that. Sick fuzz bass part for "Paw Paw Negro Blowtorch." (And whoever played that sick electric sitar part, probably Manzanera, was it even used in the final mix?) Mr. Jones passed away of heart failure in 1995, only 44 years old.

7. "I'm decadent in some ways. The real meaning of decadence is things in decay, okay? So, to be decadent isn't difficult at all, it just means that you're in a condition of being split between two cultures, of being half of one culture, that's just dying, and half of another that's just being born." These thoughtful musings voiced over priceless footage of the man emerging from his back alley studio door and into the vibrancy of the Portobello Road market, where Magic Michael busks and reggae booms from another stall. He also meets up with a "fabulous" (and also dyed-red) character named Cindy, who has a "beautiful voice" and "sings as though she's dead" and is the "closest thing to Lou Reed I've heard in a girl singer." Who is she? And, is she the one who told him, as it were, in the song "Cindy Tells Me"?

8. Rather amazing to watch Chris Spedding overdubbing his guitar part for "Needle in the Camel's Eye," which he calls "pure Duane Eddy." I just wish we could watch him playing his monumentally simple guitar solo from the song, but the big chords are great enough, even with the odd "time-goof."

THE COMET IS COMING Death to the Planet EP (LEAF)

This summer I saw a great saxophonist I'd never heard of before named Shabaka Hutchings, wailing and grooving onstage with Louis Moholo-Moholo's Five Blokes at the 2017 Chicago Jazz Festival (overall review coming soon, only a few months late). He's based in London, where he also plays in an "apocalyptic jazz" trio called The Comet Is Coming, with a synth/sax/drums lineup that puts them squarely into new hybrid territory. Dig deeper at http://www.thecometiscoming.co.uk.