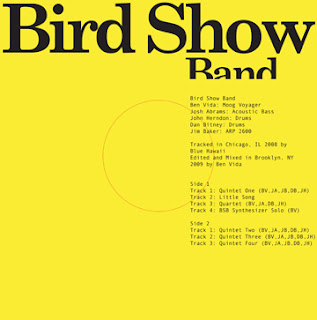 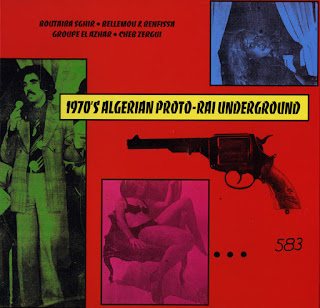 The LP is a compilation of Algerian Rai music. The word rai roughly translates as "opinion" or "point of view," which is interesting because the self-expression is indeed very unmediated and face-to-face, and in fact gets pretty rough and tumble, and I wonder if England and America in fact translated the concept of rai as punk. Just look at the titles: "I'm Still Getting Drunk... Still," "My God! My God! My Friends!," "I'll Marry Her Whether They Like It Or Not," and the curious "I Cuddle Myself," all over that driving trance beat. According to the liner notes Rai started evolving in the early 20th Century, in the Algerian port town of Wahran (aka Oran). A driving rhythm would be established while a Gasba flute played hypnotic dirge-like melodies that implied rich melancholy chord changes that a vocalist would express themselves over. For much of the 20th Century, Rai was associated with "shiekhs," apparently a somewhat dismissive term for underground ne'er-do-well musicians and entertainers. In 1970, probably due to the global rock'n'roll chic (no pun intended) of the Stones et al and the resulting cultural permissiveness, Rai no longer needed to stay underground, and a few Groupes emerged, like our subjects El Azhar. The instrumentation evolved and modernized, the bands, as LP producer Hisham Mayet writes in the liner notes, "reinterpreting the Gasba melodies on trumpet accompanied by a full orchestra of violins, drums, derboukas, accordions, and sometimes synthesizers..." There was a market for 45s, which is where all the cuts on this compilation come from. Sublime Frequencies, man... so many releases to sift through to find these gems among gems, those one or two tracks that still cut just as deep 10 years after you first hear them...
Posted by Larry at 7:47 PM No comments:

Looks like Chicago's got a CHItaper of their own to go along with NYC's NYCtaper, someone recording and posting good old fashioned Mediafire uploads of CHI-area shows on a Tumblr called Sweet Blahg, with some brief, casual, often insightful descriptions of the music. Right now I'm listening to one of the very few shows on there that I was at, Wolf Eyes closing out the first ever Trip Metal Fest Chicago. The band was even weirder than usual this night, and very, very good, so it's a pleasure to hear their set again, perhaps best of all to rehear Nate Young's classic stage banter, such as the spiel at the 30-minute mark when, after about 12 straight minutes of inzane quiet prezzure, Mr. Young pipes up as the music still pulses: "Hey man. We're checkin' in again. How you guys doin'? You okay? I know it's gettin' fuckin' weird, man. It's been weird all night. It's weird every fucking night. Wow, but man, just let us do our thing, man. That's all I want, everyone to do their fucking thing, man. Thank you all. You're bad-fucking-ass, man. You know this. All you. You're good." As for the music, I am loving their current post-Stare Case/Crasy Jim era, and sometimes imagine (in a good way) that they're just trying to take "Desert of Glue" deeper, over and over again (why wouldn't you?), and every time it comes out different and great, so they just keep doing it.
Posted by Larry at 12:00 PM No comments: