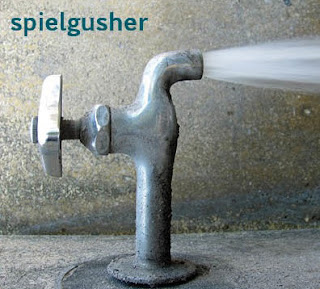 I've gotta pick up a copy of Spielgusher by Spielgusher. I was slightly dismayed that it's on CD only, but $9.99 at the iTunes store is starting to look appealing enough, especially with Meltzer drumming up excitement out on the interview circuit. There was of course the great one he did a couple months ago with Tony Rettman for Vice, and I just listened to this new long phone interview with him on the Icon Fetch site. It was cool to hear him speak out loud a riff I've seen him do in print a couple times: "Rock'n'roll, when it's on, can go from A to Z instantaneously. It's just pure magic. Jazz, which is a very autobiographical music, slowly goes from A to B to C and maybe in the course of a single album cut, you get to M. But it's a real M! Rock'n'roll, by somewhere in the 80s, it seemed to me that most bands couldn't even do A. And part of it was the beginning of videos, that you surrendered the urgency of sound for an audio-visual promotion, making advertisments for yourself as the product. That to me is when it really lost its way." Amen, right?

And hey, Mike Watt just posted the original pieces Meltzer gave to him way back in '85 for the proposed collaboration with the Minutemen. A nice little 'internet chapbook', most of which made it onto the Spielgusher album.

And here's a couple youtube clips, possibly from the fabled Rhymes With Seltzer VHS release: