Silvox Recordings is a Philadelphia-based label that has released nine cassettes so far (and co-released one 7-inch). I have here what look to be their second and third batches, four tapes released sometime in 2011, and three more released just this month. The label is run by Robert Francisco, who Blastitude completists and some others (with hopefully more to come) will recognize as the musician behind M Ax Noi Mach and the street photographer and poet behind the American Rager blog. Several releases in, his label is as interesting as his work in other media has been. Here's some reviews. 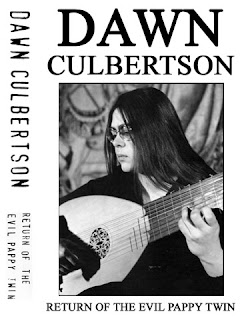 DAWN CULBERTSON Return of the Evil Pappy Twin C30. I'm going to start with the Dawn Culbertson tape, probably the biggest anomaly in the catalog of what is ostensibly a "noise" label. It's immediately apparent that something uncharacteristic is happening; the uniform black & white design with clear typeface is a Silvox standard and does little to tip a release's hand either way (except suggesting the possibility of something stark and minimalist), but add a traditionally framed photograph of a stern-looking and possibly hippie-era woman playing a lute, with the normal name Dawn Culbertson, and the weird title Return of the Evil Pappy Twin, and you don't really think "noise" or "industrial" or "power electronics." Listen to the music within, and things get a little weirder; it is indeed a possibly hippie-era woman sternly playing the lute, but she's also sternly singing, and it's not medieval madrigals either, it's an eclectic and rather hip assortment of mostly 70s rock and punk covers, like "Search & Destroy," "Blitzkrieg Bop," "Mongoloid," even the Yardbirds' "Heart Full Of Soul." The results are palate-cleansing to say the least. I'm not sure how much I actually enjoy Miss Culbertson's music, but the strength of her singing and playing is lingering in my head as I write. I like what the label blurb says: "The whole album has a pretty somber feel. The lyrics take on a new meaning when coming from Dawn. She speaks of herself through others' lyrics, highlighting different themes by accentuating different lines. Certain lines that don't stand out on the originals stand out on her versions." This is true of her lute playing as well. The liner notes also reveal that Miss Culbertson passed away in 2004, which certainly adds weight to her music. 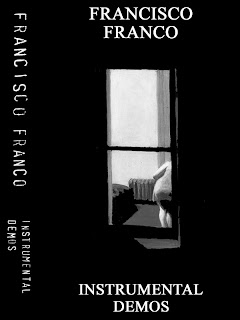 FRANCISCO FRANCO Instrumental Demos C50. This is another weird one because it's a band made of three known ragers -- Robert Francisco (M Ax Noi Mach, Angeldust, et al), Matt Franco (Air Conditioning), and Nate Davis (also of Angeldust) -- and what should they play when they all get together but . . . instrumental college rock demos that sound like a band that really looks up to The Cure and R.E.M. Okay, some of it gets a little dark, like a lighter and airier Joy Division, and most of it does have a pretty nice forlorn feeling, like prime For Against, but it's really not what I expected. Getting past these initial judgements somewhere along side two, I think the band does have a pretty good sound. It may be college rock, but at least its underground college rock, like those chilly thin-toned 1980s ballads that you only heard on tiny left of left of the dial campus stations. Still, as the album title itself admits, these are "instrumental demos," and I really do wish they had a singer. In fact, these are such good and clear demos, I can make up lyrics to 'em in all the right places. I might have to move to Philly so I can be their singer. You heard it here first. Guys? I'm in your band. 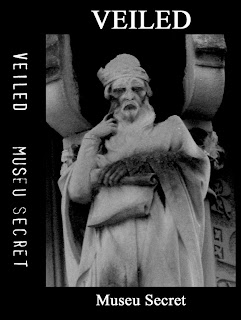 VEILED Museu Secret C24. Now here's a tape that sounds more like what I expected, again featuring Robert Francisco, this time playing in a duo with Barcelona, Spain musician Arnau Sala, who until recently ran the Ozonokids label and performs solo as Ex-Cop (see review below). There's a nice atmospheric photo of the duo in front of a wall-hung crucifix on the inside of the J-card, and an eerie forlorn religious statue on the cover. The Silvox description calls this tape "leather noise," and that's accurate, but there are no vocals, so it never really falls into the power electronics genre trap, instead riding a changing but constantly tensing electronic noise/synth pulse throughout four more-or-less equal-in-length tracks. It's loud but its also very subdued, and there is eventually even a strange languor in the way the tracks stay reined it. This works well with the "secret museum" concept, as the listener is allowed to step back and simply observe, evaluate, ponder. It also makes me realize how much I prefer drony synths in a noise/power electronics context to drony synths in a cosmic/new age context. (This just in: there's a new Veiled flexi-disc single available from the Glass Coffin label.) 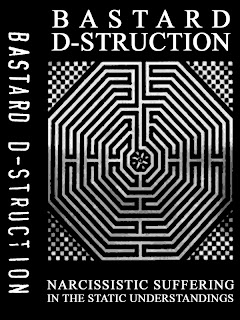 BASTARD D-STRUCTION Narcissistic Suffering in the Static Understandings C24. This one has the most 'characteristic' imagery yet; the band name is Bastard D-Struction, the cassette title is Narcissistic Suffering in the Static Understandings (say what?), the first track is called "Industrialized," and it starts in unabashed classic industrial techno fashion with some news-bite of an irate broadcaster reminding us about all the piles of shit George W. Bush dumped onto our country during his reign . . . see, it's gotten me riled up too! Industrial music works! But seriously, this is some fairly generic but also fairly ripping industrial techno. Side one gets into some gabber styles which I haven't heard for a long time, and it's pretty invigorating. Side two is on more of an 'extreme techno with death metal vocals' trip that I find pretty grating. The vocals seemed a little more sublimated on side one, which I appreciate . . . I'm just not into dudes (or ladies for that matter, but it's usually dudes) who, track after track, only do one of the following: scream, yell, bark, bellow, or growl. Combinations of these five things can work well, but please don't get stuck doing one. But yeah, I already said that the vocals are somewhat varied on this tape, so they get a pass. The tape also has a cool cover. In general, I really dig the Silvox visual aesthetic; I appreciate not having to dig and/or guess to figure out who the artist is and what the name of the album is, and in my old age I'm finding black & white to be just as evocative (and even as psychedelic as) color. 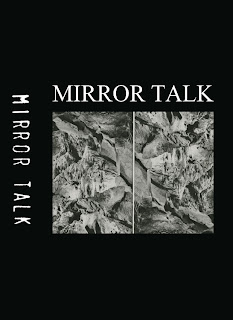 MIRROR TALK s/t C38. This band, from Berlin, Germany, appears to be a Silvox discovery, and they've given us an au courant voyage into straight-up 80s-style synth-pop vocal tunes. It's not even really coldwave, more flowery and new romantic. Melancholy, but very, very pretty. Although it is a recent recording, there really isn't a single note, vocal, or move that couldn't have come straight from the 1980s, and I find that somewhat trendy and nostalgic. That said, I do like the way side one ends with a few minutes of near-cosmic instrumental music. It's like these guys earned the right to go near-cosmic by working out a few heartfelt-enough pop ballads first, just as Silvox Recordings earned the right to release trendy and nostalgic 1980s synth-pop by putting out varied music like Veiled and Dawn Culbertson first. 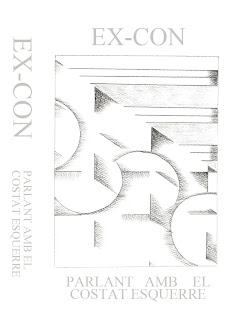 EX-CON Parlant Amb El Costat Esquerre C40. Okay, back to Silvox's bread and butter: "Delicately controlled, raw electronics. Industrial, rhythmic." This is a solo tape by Arnau Sala, the Spanish half of the Veiled duo, and again the label blurb I just quoted describes the music herein succinctly and accurately. There's been a lot of talk the past year or so about how "techno is the new noise," and how former noise artists are turning into techno artists. Some are being accused of trendhopping, not good enough to make real techno. Meanwhile, Ex-Con is sitting comfortably somewhere in between noise and techno without worrying about being either, just making music, and excellent tapes like this one. I like what Sala is doing and I think this and the Veiled tape are the pick of the label so far. 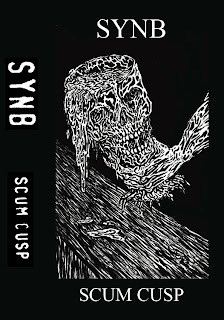 SYNB Scum Cusp C70. We close out this Silvox roundup with another 'characteristic' release: old-school "heavy dark electronics." In fact, SYNB is the nom de guerre of an actual old-school underground noise artist active since the 1990s, Mat Brinkman. You might know him as a musician with the groups Forcefield and Mindflayer, a superb visual artist, and a key member of the so-called Fort Thunder scene that spawned Lightning Bolt and others. He certainly knows what he's doing when it comes to heavy dark electronics, with plenty of space and separation for the weird sounds to be heard playing off of each other. Industrial rhythms both sublimated and pounding, creep-zone textures, and highly controlled white noise. Plenty of good stuff on the tape, though 70 minutes of it is a little too much for me. Tapes can be a different beast than an album, more like sketchbooks. Not to say this particular work is sketchy -- this stuff is "fully realized" -- there's just a lot on here, which means this tape will definitely give you your "money's worth."