This evening's inspiration brought to you by this Too Short interview on the top-notch Cocaine Blunts blog, featuring heavy quotes like...

"We just knew that we could do it, so we started doing it. We would take 12″ records from New York artists and flip them over to the b-side and play the instrumental, run it through a DJ mixer with a microphone and rap over the instrumental."

"That’s my whole thing, it had to be the funk. And we were serious about that 808 too. Our whole thing was we make music for cars, we don’t make music for dance floors, we didn’t make music for listening to in the house, we made the music just for cars and people who had loud woofers in their cars. That was our one dimensional goal. We got music in the trunk. That’s what it was."

"So I always felt like that funk was my edge. It’s slower, it’s funky, it’s not for the dance floor, it’s not radio music. And it was just being rebellious like fuck the radio. People tell you all the time, ‘you gotta make radio songs’. Fuck a radio song. It’s still my philosophy."

"I kept that shit going long after everybody would chop the songs down to 3-4 minutes and they started writing rap songs and structuring them like R&B songs. I was like ‘Fuck that shit. I’m a rapper’. I made some songs where I would come on rapping from the first bar and the song would actually fade and I’m still rapping. I did that shit on purpose."

Haven't even gotten to part two yet..... Hearing Short talk about the slow funk and about "dudes rapping for 15 minutes straight" has got me thinking that one of the 12" records from New York he's talking about up there was "Beat Bop" by Rammelzee vs. K-Rob, its B side instrumental relocated to nowhere near an art gallery.


OTHER LISTENS TODAY
Death For The Whole World To See (they're playing at the Empty Bottle in Chicago tomorrow night, Saturday Sept 26.... part of a 3-show US tour, Detroit tonight and Cleveland on Sunday)
Polvo In Prism (seriously killer album!)
Morton Feldman For Bunita Marcus
Alan Bishop & Richard Bishop Present The Brothers Unconnected
Black Sabbath s/t (this just came up on ipod album shuffle... listening to the title track opener right now for the 100th time and wow, the way Bill Ward uses just the toms and hi-hat on the self-titled opening song, the "wide and progressive arrangements" Carducci was talking about... he makes a lot of room right there, enough for subsequent entire generations of heavy to fit comfortably inside... also amused that my ipod, and Wikipedia, has the bass solo "Bassically" as the intro to "N.I.B.," because up until now I always thought of it as the outro of "Behind the Wall of Sleep"...)


(Just found this 'best youtubes found on blogs' post from 11 months ago... better late than never!)

TOM SNYDER INTERVIEWS FM RADIO DJs sometime in 1979-1984, from WFMU BEWARE OF THE BLOG... The Fugs and Dennis Kucinich both get talked about... Frazier Smith did the KLOS interview with Black Flag that was pressed as a promo LP in '82...


FELA KUTI from TLASILA BLOG (first one is shot and narrated by Ginger Baker!): 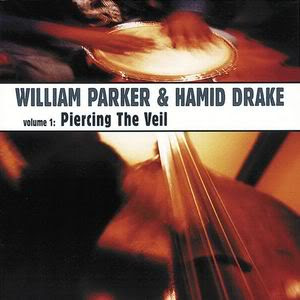 Checked out Chicago Jazz Fest today... it was nice to see William Parker jamming a 2PM side-stage duet with Hamid Drake. (He was playing again at 7PM on the main stage, presenting "the inside songs of Curtis Mayfield" with an octet featuring, oh, Amiri Baraka and Dave Burrell, but for some lame reason I couldn't stay.) This 2PM deal was billed as an "Art of the Solo" presentation, with Parker presumably giving a lecture, demonstration, Q&A, that kind of thing, but when I got there he had the one and only Drake setting up with him, and began the show with some casual and funny remarks about how it was actually going to be an "Art of the Duet" presentation, going on to say that (I'm paraphrasing) "it's significant to be talking about the art of the solo here in Chicago, because the AACM always stressed the importance of developing a solo repertoire, no matter what your instrument. That way, if the piano player doesn't show up, or the trumpet player doesn't make the gig, so what? You're still cool." He talked about how we always expect the bandleaders to be the horn players or the piano players, but "what if all the bassists and drummers went on strike... what would they do then?" He summed it all up by saying, "So, bassists and drummers are extremely important. How do we know? Because trees don't grow from the top down. They grow from the GROUND UP." (This guy would get along with Joe Carducci.) And then he said that they were going to play, and they might stop and talk some more, but that they would probably just keep playing instead, and that maybe when they were actually done they would take questions from the audience, but that he couldn't understand why music would make anyone want to ask any questions, except for one: "Why questions?" And with that, they launched right into the funky, hypnotic, feisty, drony, completely freestyle duo music that they do (check out the Piercing the Veil album for an example), and they did it for a long time. Parker plays his bass like a massive four-piece drumkit, a constant one-chord/universal-chord style, and Drake either pushes it along massively or lights it up with streaks of fire. 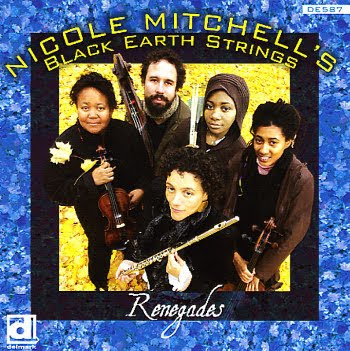 Playing simultaneously on the next side-stage over, requiring a little bit of back-and-forth, was Nicole Mitchell's Black Earth Strings. Ever since I saw her lead a large group through an unreal hour-long tribute to Alice Coltrane at Millenium Park's Pritzker Pavilion two years ago, I've been a big fan. This Black Earth Strings group was smaller, more airy, feathery, and etheral, with Mitchell's flute, Renee Baker's violin, and Tomeka Reid's cello fluttering and dancing all around each other, playing intricate bustling melodies and breaking off for careening solos, held down and moved along by the excellent rhythm section of Josh Abrams (bass) and Shirazette Tinnin (drums). I was a little frustrated by the sound, like the band was playing great but having trouble punching through that trademark wind gusting off the lake, but I still think this is what cosmic jazz sounds like today and I really want to hear them play again, as well as check out their new CD Renegades on Delmark Records. 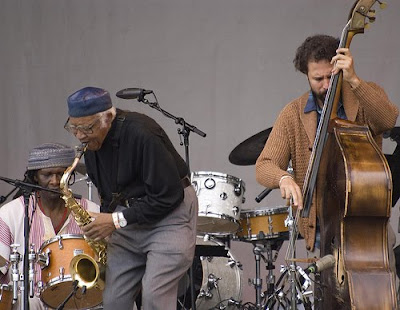 After that we sat on a blanket and ate up all our snacks while the inevitable Afro-Cuban salsa/jazz fusion band took the stage, absolutely bothering no one, not even myself. I was just lounging, killing time until 5PM, when the main stage at the Petrillo Music Shell was kicking off its evening schedule with a performance by the always-killer Fred Anderson Trio, this time with Drake (again) on drums and Abrams (again) on bass. They came out and basically played for 40 minutes non-stop, starting with an unaccompanied solo by Anderson that cut right through the picnic-blanket crowd chatter, not with honking and screaming, but with forceful punctuation, sharp tone, and deep extended thoughtful melodic lines. You know, Fred Anderson style. Then the rhythm section came in and you know they were good, Abrams with his pulsing guimbri-influenced lines and Drake just being Drake. I've seen him play a lot but he took a drum solo about 10 minutes in that was next-level even for him and basically got a standing ovation. And like I said, they just didn't stop. I'll admit that the momentum came and went, and the transitions between solos, duos, and trios weren't always sharp, but in a way that made it better, because whether he's at the Velvet Lounge or here on this big summer-fest stage in front of a few thousand people, Fred Anderson just shows up, gets into it, and doesn't look back. And the shorter second piece they played was really sublime, Drake coming out front to sit with a big tar drum and sing African style, Abrams driving it with another guimbri-style line, and Anderson sagely hanging back and playing sweet melodic color low in the mix. All in all, it was a beautiful day in Grant Park and the music was perfect... the Chicago Jazz Fest continues to be a sweet end-of-summer ritual in this town.