The Revolutionary Ensemble was an avant-garde jazz trio (probably most specifically what was then called a 'new music trio'), formed in New York City by Leroy Jenkins, Sirone (aka Norris Jones), and Jerome Cooper. They started playing around 1972 and ended around 1977 or 1978. Their line-up was somewhat unique in that it was a violin trio, with Jenkins on that instrument, and Sirone and Cooper rounding out the traditional jazz-trio rhythm section of double bass and drum kit respectively. Without a horn or a piano, the group was going to have a singular texture, that spiky fractured singing-string vibe, less breath, less percussiveness (although Cooper is a monster drummer). In a sense they are a post-AACM group, not officially affiliated, but Jenkins was a member, and Cooper was from Chicago as well and, like Jenkins, studied under the legendary music director Walter Dyett at Dusable High School. I only have 3 of their LPs, but these are cherished: 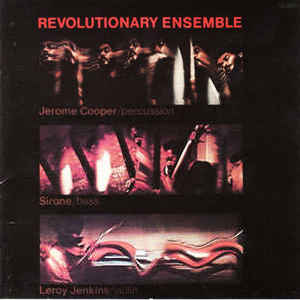 VIETNAM (ESP-DISK) This is the one that started it all for me, when Blastifriend C. Möön bought a copy, one of those blessed German ZYX-label CD reissues of the ESP-Disk catalog, and played it on his weekly community radio show The Cosmic Egg, which I used to tape directly off the air. I could not believe the sounds I was hearing coming from these refined classical instruments, the violin and the double bass, thrashing away at high amplified volume like they were in the middle of a contemporaneous King Crimson blow-out. Add an incredible drummer playing in a free-form but very disciplined pan-African free-music style, with a very strong underlying formal/classical sense of architecture, and you've got one intense band. And to have the name of the piece(s) be "Vietnam," performed in 1972 while the Vietnam War is still raging? Easily one of my Top 10 Proto-Metal LPs. 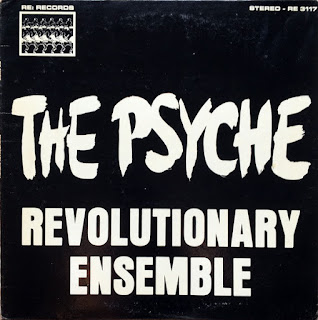 THE PSYCHE (RE RECORDS) This one was released in 1975 on the bands' own RE record label (stands for Revolutionary Ensemble) with a oddly bracing text-only cover design. Kinda scary, like it could be the title card for an early 60s noir/arthouse movie. Music's kinda scary too. Which can't be underrated with regards to the whole AACM approach to creative post-jazz music, the fact that it was so often SCARY, because it was influenced by International New Wave cinema soundtracks, and scary spiky composers like Bartok and Webern and Berg, not to mention proto-punk with its sometime forays into Artaudian shock theater. Regardless, the way the pieces are arranged and the way they progress, in contrast to many other 60s/70s examples of revolutionary music, exemplify the point Lester Bowie makes, 'mock-prosaically,' on page 338 of A Power Stronger Than Itself by George E. Lewis (2008, University of Chicago Press): "The main difference was that we would STOP. We had rests. We had whole notes. We were dealing with some melodies." 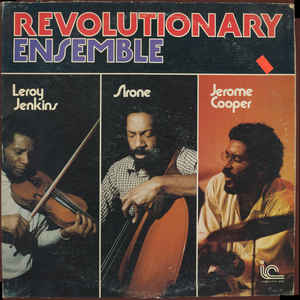 REVOLUTIONARY ENSEMBLE (INNER CITY) This self-titled album was released by Enja in 1977, then reissued the next year in America by a label called Inner City. The Inner City cover is kinda dry and schoolbookish; I prefer the somewhat proto-cyberpunk plainness of the original edition, but regardless of the sleeve, this is a great album of music, my favorite by the Revolutionary Ensemble after Vietnam. This is a quieter album, with some of their most precise and haunted playing, spinning out delicate themes, long-held quiet sections that build into vicious-tempests-in-ornate-teapots, then space back out again into eldritch 12-tone styles. It also has Jenkins's composition "Chicago," which really struck a melancholy and heavy chord in me long before I bought this copy, when I first heard it in 2002, having checked out a copy from the Sulzer Regional Library up in Lincoln Square (same Inner City edition). It was less than a year after I moved here, and I loved the city of Chicago then, and love it now, but was certainly already aware of its cold overpowering strength as a location, and could really hear that in the music. But now it's 15 years later and I've lived here and learned a lot more about Chicago, certainly a lot more about the African-American experience here, and now I've read Warmth Of Other Suns by Isabel Wilkerson, and now I know that the melody was composed and performed by not only a Chicagoan like myself, but unlike myself, a black Chicagoan who grew up in Bronzeville on the South Side, born in 1932 to parents who had come to Chicago from Tennessee and Mississippi, looking for work and to escape rampant unpoliced white supremacist terrorism, only to find a different kind of racial hostility, one that was "unwritten, mercurial, opaque, and eminently deniable." So, needless to say, I can now hear a whole lot more in the melodies and performance of "Chicago," things that even just 15 years ago I was only aware of in the broadest and briefest 4th-grade-textbook sense.