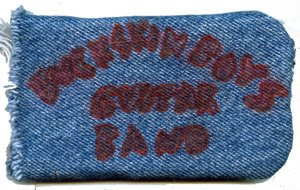 Buckskin Boys Guitar Band s/t CS
"Pac Man" CS
Acres Volcanic Legacy CS
Cubs vs. Brewers on WGN Radio
Es Sateenkaarisuudelma
Espers The Weed Tree
Terry Riley A Rainbow in Curved Air
Buckskin Boys Guitar Band is a New Brunswick supergroup featuring names like Dan DiMaggio, Dave Sutton (also of Car Commercials), the 2673 guy, Kate of the Bone Tooth Horn label, and other NB Noise luminaries, but there's no Noise here. It really is what the name would suggest, a late-night ramshackle guitar band, picking and zoning, playing some instrumental music that is rootsy and even back-porchy but still weird and psyched-out. Their name might be a Leonard Cohen reference, which is weirdly apropos, even if halfway through side two it begins to sound like the Car Commericals big band when it all crumbles into a glorious nervous mess, out of which emerges some beautiful mumble-folk arpeggios that quickly get swallowed up again. Rough-hewn tape-junk that happens to be a very nice late-night listen. Also from New Brunswick, this Pac Man thing is part of a new batch from Bone Tooth Horn, still packaged in their unmistakable uniform B&W J-card design. This is a C24 and seems to be some sorta 'reissue' of some godforsaken thrift-score quick-buck novelty-item LP from the 1980s video-game craze, in which Pac Man himself sings songs about how "if it's a game, then I want to play it forever..." or something like that. Ms. Pacman shows up too. "Our most overtly psychedelic release yet," says the label, and I can see that, actually. It is more psychedelic than the Acres release, which I had high hopes for with the volcanic imagery and the amazing label description: "the ebb and flow of molten light." Didn't quite get that on first listen, but I'll try it again sometime. After listening to mp3s of it today, I'm gonna try and find a copy of this Es album on the original double vinyl... it's all excellent modern bliss-out imaginary-soundtrack stuff, but this side-long track "Harmonia, rakkautta" is really something.... Espers' Weed Tree is sounding better than ever, the Nico and Durutti Column covers are so beautiful... love the BOC cover too ("Flaming Telepaths"), 10 minutes long, great guitar solo, lyrics that blend imagery from alchemy and drug addiction, sounds like ACID FOLK to me.... first time I've heard the Terry Riley album and it's cool but it struck me as the sparkly clean 'studio version' of his organ + time lag accumulator jams, and I can't help but prefer the awesome smoky late-night 'live versions' as heard on Persian Surgery Dervishes and the Koln bootleg with Don Cherry....
Posted by Larry at 5:31 AM

agreed about the version of poppy nogood on that terry riley disc, but what about the title track...? that thing alone trumps everything on the new matmos

Larry, how can I get a copy of that Buckskin Boys Guitar Band casette?

That worked! Thanks. I'm excited to hear this little nugget.