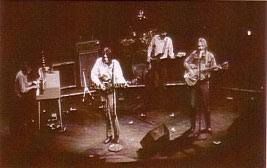 The Bollywood Steel Guitar comp is yet another great listen from the Sublime Frequencies label. You could pitch it to the lounge/exotica 'incredibly strange music' market which is usually a bit much for me, but so far everything from Sub Freq (and that's 44 releases in less than five years) has been presented with genuine enthusiasm and none of the smugness you tend to get when any sort of post-pop post-globalization hybrid musics are collected and imported. And hey, some of these Bollywood steel guitarists could really rip. A huge thank you to the Truer Sound blog for posting a few Neil Young & Crazy Horse bootlegs... I've been looking for something from the Danny Whitten era, and Danny by the River (aka Winterlong aka Electric Prayers) fits the bill very nicely. Reading Shakey by Jimmy McDonough really crystalized just how much Whitten contributed to Crazy Horse, quoting Neil himself saying stuff like this about his rhythm guitar playing: "Billy and Ralph will get into a groove and everything will be goin' along and all of a sudden Danny'll start doin' somethin' else. He just led those guys from one groove to another - all within the same groove. So when I played these long guitar solos, it seemed like they weren't all that long, that I was making all these changes, when in reality what was changing was not one thing, but the whole band. Danny was the key." There are those moments in the extended "Down By The River" and "Cowgirl in the Sand" jams on Everybody Knows This Is Nowhere that all of you know (even if you don't know that you know) when Whitten's rhythm guitar under Neil's lead gives way from sharp stabs to open, ringing chords, like the band has just moved together out of a cloud and into momentarily open sky. Also, his background and double lead vocals throughout Nowhere (which is really the only studio LP he made with Young, some scattered appearances on After the Gold Rush notwithstanding) sound so natural and blended that I never even thought about who was doing them and what a great singer he was. It's actually the same as his guitar playing in that his singing isn't just one person, it's "the whole band." (Keep in mind that Crazy Horse started in 1962 as a streetcorner doowop group called Danny & the Memories.) Anyway I love this boot, two sets from the Music Hall in Cincinnati, Ohio, 2-25-1970. I actually like the opening solo acoustic set better than the electric, the way it starts with the sublime Buffalo Springfield tune "On The Way Home" and ambles on through long Neil raps and a total of eight songs with that vintage foggy downer vibe. Neil even apologizes a little for it with the somewhat famous stage banter "I live uptempo but I play downtempo." Great versions of "Helpless," "Sugar Mountain," an early fragment of "Don't Let It Bring You Down," and more. The electric set is fine and often fascinating but a little rocky and unfocused as a through-listen, that is until they hit the "Down By The River" and "Cinnamon Girl" closing. Both songs are massive - "Down by The River" clocks in at 20 minutes and Neil's soloing is absolutely sick. In The Court Of The Crimson King is one of those albums that you hear when you're young, with little to prepare you for it other than like Genesis and Yes, and it really blows you the fuck away, and then you spend the next couple decades learning about and sometimes hearing every other bizarre and crazy underground record ever made, and then one day when you're in your 30s you pull out that dusty copy of In The Court Of The Crimson King and put it on for the first time since you've heard This Heat or whatever else on the NWW list, thinking it's gonna sound a little dated and pompous and stuffy - I mean Greg Lake is in the band - but then you put it on and the opposite occurs, now it REALLY blows you the fuck away, a lot more than it did when you were a teenager. I mean "20th Century Schizoid Man" alone will never be topped, and the always-terrifying title track now has even more weight after its stunning usage in Children of Men... 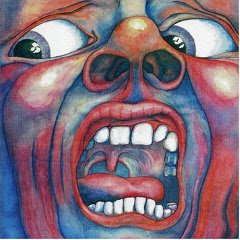 I agree, in the court is an amazing album.