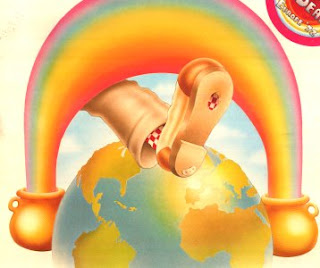 Man, sorry to all you Dead-sensitive people for all the Grateful Dead I keep listening to and listing. They are one of the few bands that you can literally lose friends over, and I'm assuming the same is true of readers, so bear with me, or skip to the next post, or just go run around and get some exercise or something.... I'm gonna listen to some Dead albums... their first album is similar to the first Bob Dylan album - both self-titled debuts, both recorded by a visionary artist/band before they became really visionary, both featuring only two original compositions by the artist and therefore destined to be considered a lesser work, but nonetheless a reimagining of traditional American music that bristles with a raw youthful punk energy. Their 10-minute studio version of "Viola Lee Blues" is actually awesome, I think better than any live version I've heard. From the Mars Hotel - man, this album - it's far from great but definitely better than I expected. "Money Money" is possibly the most regrettable song they ever recorded, but even it is undeniably catchy on here and in fact better than "Loose Lucy" in this album's de facto 'battle of the misogynist near-outtakes.' As for the really good stuff, the studio version of "China Doll" is pretty much perfect, "Scarlet Begonias" is a short but sweet reminder of some great live extensions, "Ship of Fools" is a bit of a revelation (great gospel rock, sweet organ playing, certainly better than anything The Band was doing in 1974), and as for "Unbroken Chain," maaaan, if it was on Wolf King by John Phillips, or some Dennis Wilson solo album, or any private press release you'd never heard of, you would be going apeshit over the jazzy/downer 1970s vibe. And I might be able to fool you with it in a blindfold test, because the not-so-immediately-recognizable Phil Lesh wrote it and sings lead. Amazing song, good album - I think I like it better than Wake of the Flood. Europe '72 on the other hand... if you don't like this album, then you'll never like the Dead, it just won't happen. I'd say the same thing about the s/t "Skull & Roses" double LP that preceded it in '71, and of course the two studio releases that preceded it in '70, Workingman's Dead and American Beauty... quite a four-album run.

I, for one, am a big fan of your Dead reviews. Keep 'em coming!