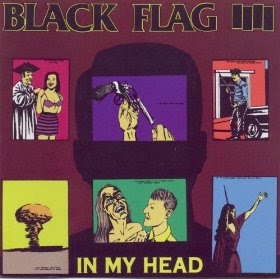 Black Flag In My Head
Magical, Beautiful The Right Rock b/w Wings in the Sky CD
The Green Knight The Eternal OM CS

Espers The Weed Tree
Led Zeppelin Houses of the Holy

First time I've ever heard In My Head - what a weird album. Joe Carducci calls it "a masterpiece" in Enter Naomi. I don't think I'll go that far, but even just writing about it now I'm feeling drawn back to how the songs kind of slowly ooze out via Greg Ginn's bizarre prog guitar logic, and how Rollins's vocals are buried in the mix like a dream taking place in the next room. Even if the individual songs don't stick the overall sound certainly does... I'll spend more time with this one, I'm sure... Magical, Beautiful has released a new three-song CD EP called The Right Rock on his/their own I Hear A New World label. Apparently the whole thing was conceived and written while M,B main-man T. Thurston was on a family Caribbean cruise, fueled by the endless waves and complimentary mojitos. So, we get a tuneful and wordy white-guy island lilt that immediately made me think of Van Dyke Parks's Discover America but that notion was just as quickly confounded by long stark electronic instrumental passages. Quick and intriguing sui generis listen, I've spun it three times today. The Green Knight thing is a cassette on the Thor's Rubber Hammer label and I can't recall too much about it other than it being fair-to-middling power-drug-drone.
Posted by Larry at 5:51 AM