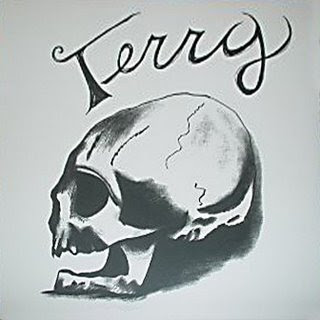 Listened through five albums I know of by the Chicago mystery unit that goes by many names (Jim Collins aka Terry aka CC aka Boots aka Snake & Remus aka Tommy Roundtree aka Arian Sample aka probably more). All of these are worth a look - morbid, grim, melancholy psych-folk textures abound - but the more I listen I really think only two of 'em are in near-masterpiece consideration: the Snake & Remus album (available only in a box set from the HP Cycle label that also includes the CC and Boots LPs, which aren't bad) and the Terry album Rovji. Your mileage may vary, and in many ways the Tommy Roundtree Jungle Blood LP is the most memorable of all.... 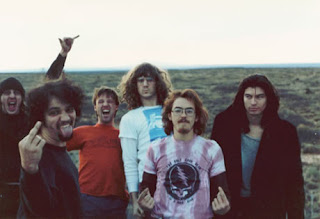 Reading and re-reading Carducci's Enter Naomi has got me going back through all the key Black Flag texts, and one of the biggest finds the book mentions is Reality 86'd. This is Dave Markey's Super 8 documentary of the 1986 Black Flag/Gone/Painted Willie tour, the same one that the late Joe Cole kept a diary for while working on the road crew, posthumously published as the rather mindblowing book Planet Joe. This final lineup of Black Flag was their least definitive but also pretty underrated - Anthony Martinez was a powerhouse on drums and in some ways that is what the band always missed, a no-bullshit drummer who could really drive their pummeling riffs. Robo was very close but there was something just a little slippery about his style... Stevenson was a great drummer of course but I associate him with the slowed-down prog direction of the band... and irregardless, the real draw of this footage isn't the music so much as the lives led in and around it, and seeing it all on naturally psychedelic Super 8 film, the load-ins and load-outs and goof-offs and roadwork in a world where Ritchie Blackmore's Rainbow is always on the boombox and the whole world is constantly solarized... I'm telling you, it brings a tear to my eye. I would like to see this on DVD more than almost any other film, ever, but apparently Greg Ginn doesn't want that to ever happen so it probably won't. You can watch a couple clips on YouTube though, along with a lot of other classic stuff, at Markey's We Got Power Films page. I've been digging through so much Flag stuff these days I've even been listening to recent stuff by the Chuck Dukowski Sextet on their MySpace page. I guess I was scared of this band because I thought it would be some insane shredding lardacious 1972-ish hard rock fusion jazz wearing pastel collared shirts with like pictures of fruit on them.... and that's almost exactly what it is. But listen to their song "Someone Made of Me and You"... it's a very good slowburn 70s rock ballad... and their version of "My War" is actually amazing, Dukowksi asserting his authorship in a big way. But even if you're not in the mood for some serious melting-pot post-apocalyptic beach-fusion, you can't deny Dukowski's unlikely significance as one of the key countercultural figures of the last 30 years (for the trickle-down effect had by his achievement in musical performance, personal style and philosophy, booking agency, and general spokesmanship).