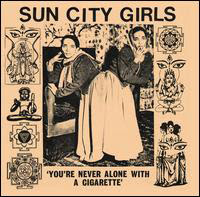 There had been rumors of Sun City Girls releasing some singles compilations on CD, and the time is officially nigh - Volume 1 has a release date of March 4. But, as anyone following their Cloaven Cassette reissues might have expected, these aren't gonna be straightforward. For example, Volume 1 here bears the cover art and title of the band's 2nd single from 1990, You're Never Alone With A Cigarette, and reissues both of its tracks, including a 12-minute version of the B-side "The Fine Tuned Machines of Lemuria" (5 minutes long on the original), but the band's first single, And So The Dead Tongues Sang from 1989, isn't dealt with here, and their third single, the double 7-inch Three Fake Female Orgasms from 1991, is only half-dealt with, the first 3 of its 7 songs appearing. To round things out we've got three previously unreleased songs from the Torch of the Mystics sessions (including a fantastic version of "Amazon One" that I already prefer to one on the Live on Planet Boomerang), plus all 48 seconds of the "Harmful Little Armful (For Will Shatter)" track that appeared on the Bruce Lee, Heroin, and the Punk Scene 3x7" box set from 1993. See how annoying it can get, discography-chasing? Especially when the band has put together such a non-annoying and highly listenable album in its own right, capturing a time around 1987-1988 when they were fully evolving out of their raw so-called 'weird hardcore' beginnings into the highly singular and terrifying unit that recorded Torch and couldn't be so-called anything. The remastering by Scott Colburn has to be mentioned as well - the tracks sound fantastic. It felt like I was hearing opening track "100 Pounds of Black Olives" for the first time ever, which had me running back to my share-blogged mp3 rip of the original vinyl to see if it was even the same music. It was, but I won't be listening to it again now that this version exists... I took commenter Benjamin's advice and checked out the 'other' Jane release, Coconuts, and I think I do like it a little better than Berserker. The title track is probably their best thing anyway, a tranced-out drum-machine piece, more krautrock than techno. Track two did nothing for me, though... well, it did make me jump to another song before it ended.... New Bran(...)Pos CD on the C.I.P. label (Crippled Intellect Productions) - he's one of those Bay Area noise surrealists that have been going strong for awhile - see also the Resipiscent label and of course Brutal SFX. I like the first track, impossibly slow vocals over creepy yet somehow pleasant organ - after that it dives deep into total Bay Area-style weird-noise, squiggly, squeedly, surprisingly diverse, hard to put a bead on. I'll have to get back to you if I ever do draw a bead or two... Still working my way through the massive Monument to British Rock release, summary to follow.... so far I'm only on Side 3 out of 6... definitely some deep drony psych so far, more of a time machine to the 1990s tape-label scene than it is the rock gods of yore that are ostensibly homaged by the title, but we'll see what else emerges before this thing is done... it does look good with its ultra-wide black & white sleeve (no gatefold), on the Smokers Gift label...
Posted by Larry at 5:43 AM

Definitely see Jake/Bran..Pos if you get the chance. He's a brilliant performer. Some of his moves & faces might remind you of Alan B (he's done some audio & editing work for Sublime Frequencies, btw).