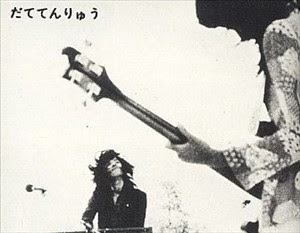 Sometimes a noise recording is best judged by the shut-off effect. Listening to side A of the Oubliette tape, a full-on super-loud squalling piece between 10 and 15 minutes long, I was zoned out and indifferent until the piece abruptly ended and the sudden silence became the most intense moment of the whole thing. The 10 or 15 minutes of noise music that preceded it is no longer shocking, contact miced pedal chained whatever, but the sudden realization of what we have become inured to is. If I remember right Side B basically just does the same thing again, 10-15 minute onslaught with awesome shut-off effect, which is cool. Not necessarily original music but it is a powerful tape, good artwork too, on the Teenage Whore Tapes label from I think Florida. Oubliette is from somewhere in Georgia. For a while there in my youth I was a rabid collector of Funkadelic albums, but after I had found about 10 of 'em I decided it was time to start digging for other things. Two albums I had always passed on and never did buy, thinking they were 'past their prime' releases, were Hardcore Jollies and Electric Spanking of War Babies. However, now that rampant album-sharing has reared its online head I just can't say no any longer, and I was definitely wrong about Hardcore Jollies - I think I had it in my head that they lost it when Eddie Hazel left, but what the funk was I thinking? Michael Hampton is awesome in his own right and this is a fine vintage Funkadelic album - in fact it's the last time "Original P" vocalists Fuzzy Haskins, Calvin Simon, and Grady Thomas sang with the group (they did still record with Parliament). My first inkling that I had misjudged was hearing its leadoff track "Comin' Round The Mountain" on Chic-a-Go-Go, and it sounds great here too, even without the visual of Ratso and Pedro Bell and a buncha other awesome people jamming out to it. Some confidently claim that it is Hazel and not Hampton playing guitar on "Mountain," but even if it's true the axe-wielding trio of Hampton, Glen Goins, and Garry Shider more than hold their own on the rest of the tracks, bringing a rumbling techno metalloid low-end that really isn't like anything else in funk or heavy metal before or since. The live version of "Cosmic Slop" sounds like it has about 14 simultaneous guitar solos. War Babies, on the other hand, isn't clicking like Jollies. It is after all from 5 years later with their best-selling stylistic change-up One Nation Under A Groove in between, but there is something weird going on here that is distinct from even the usual Funkadelic weirdness, and of course I'm gonna get both of these on vinyl anyway, for the Pedro Bell gatefolds if nothing else.... Further exploration of solo Emeralds stuff has led me to Lilypad, the solo project of "Big John" who is the "synth guru" in the band. And as much as I thought Steve Hauschildt's solo stuff (see previous post) sounded like it could be the whole Emeralds band, well shit, so does this, though I'm starting to see how the parts fit together and, more importantly, stay out of each other's way. Lilypad is more minimal and soft-drone oriented than Hauschildt, more of a straight-up early Popol Vuh style. Two long tracks, great album. Whoah, 1971 by Datentenryu (pictured) might be the single craziest Japanese rock album I've heard yet. Well yeah, except for certain Flower Travellin' Band, Les Rallizes Denudes, Magical Power Mako, Fushitsusha, Merzbow, etcetera, but Datentenryu do throw a serious curve ball in the form of insane ELP/Deep Purple/Young Rascals organ rock madness played with a nonstop searing punk soul attack. I feel like there were about 200 'indie rock' bands in the 1990s that would've loved to have sounded like this (Delta 72 come to mind)... Man, the Robert Anton Wilson DVD was pretty intense. It's not exactly a great production, kinda made-for-cable, complete with cheesy public-access-studio 'sci fi' effects during a couple segues, and it is disorienting to see how aged and infirm he was at the time of the filming, and then to have that filtered through a wry and fairly soft-spoken Irish Catholic Brooklynite demeanor, none of which I expected from his literary voice... but the various shortcomings of the human nervous system when it comes to dealing with these kinds of filters and presuppositions is just the kind of thing Wilson eloquently deconstructs, and after about 15-20 minutes of adjusting I could just relax and listen to the man's philosophy, and I like just about everything he has ever said. Glad he wrote books, because it's hard to keep up with all the ideas he talks about, especially when you realize that he talks about them rather disarmingly in person, a little out of the side of his mouth, Brooklyn style... there's plenty of RAW stuff on YouTube, here's a little taste to get started... I love his three reasons why people believe in conspiracies...

And in case you missed it, Pedro Bell 'interview' and 'performance' on Chic-a-Go-Go, followed by "Comin' Round The Mountain":