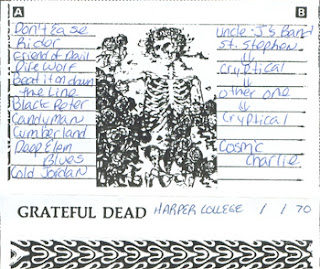 Finally finished A Monument to British Rock tonight in a single sides-three-through-six sitting. I had already listened to Side 3 a week ago, but needed a refresher and the album flowed along very nicely from there and I easily went the distance. Three of the six sides are by the Phil Todd/Ben Reynolds/Alex Neilson trio as heard extensively on the Love That Whirrs CD for Last Visible Dog - together they play a weird shuffling skiffling free-folk meets negative-space fusion/drone hybrid, here for three side-longers. Side 4 is also a side-longer in which the duo of Phil Todd and Melanie Crowley achieve the same feel but with no drums, and less of the relatively rococo string action that Reynolds brings. Sides 1 and 5 are Phil Todd solo and each feature four shorter overdubbed tracks. Side 5 is my favorite one of the whole thing, with each track a separate brilliant glowing setting, more varied than the strange 'electro-tampura' drone-fields he plays on the jam sides, which aren't especially distinguishable from each other, but in a good way that fully inhabits a rich weird atmosphere that really doesn't have much to do with British Rock or anything else except maybe some strange unnamed symptoms of the universe and how they play out when you're lazing on a sunny afternoon. Nice fat LP sleeve too for those three slabs, cool B&W graphics. The Grateful Dead tape was at the rad Gallery Bookstore on Belmont (the one with the sign that says "Town Cleaners") for seven bucks, stuffed right into the music books section. I think this is the first time I've seen a pre-computers Dead tape and figured I should grab it as a totem of those tape-trading days, before its legacy evaporates under the weight of a million external hard drives. This tape has a generic J-card design that could be used for any show - the spine says "GRATEFUL DEAD" with a " / / " thing so you can fill out the date yourself, and the 'cover' is a crude xerox graphic that sets the classic skull & roses image in between "A" and "B" track listing forms. This particular trader just wrote "70" instead of "5/2/70" and even spelled Harpur College wrong, but hey...................it's all good. This show was one of their "An Evening With The Grateful Dead" marathons in which they would start by playing an acoustic set, then sit in on a New Riders of the Purple Sage set, and then come out again as the Dead and play a full electric set, often two. On this night they played two, and it's thought by many to be the band's GREATEST SHOW EVER, available in its soundboard-recorded entirety (except for the NRPS set) as Dick's Pick #8. This version is an audience recording and, being on a mere 90-minute cassette, is naturally incomplete, but it's still a great way to hear the show. For the first time I can really see why some people prefer AUD's, because you do get a lot more of the energy of the night and the venue. Heard from the audience, the acoustic set sounds really raw and surprisingly energetic, with great versions of "I Know You Rider," "Friend of the Devil," "Dire Wolf," possibly the best "Black Peter" ever into a "Candyman" tease right into a rip-roaring "Cumberland Blues" and more, every song is great. Also, AUDs make a whole lot more sense on a hand-made cassette than they do as downloaded or streaming mp3s. When the music has to travel from 1970 stage to somewhere in the 1970 audience to tape to tape to tape to tape and etc all the way to your stereo in 2008, it just feels like that much more of a privilege to be hearing it. The electric side features a Stephen>Cryptical>Drums>Other One>Cryptical medley and then ends with "Cosmic Charlie," only about half of the actual 2nd set, but sweet tape and right now I think I prefer it to the poorly tagged iPod-only version I have of the Dick's Pick... Still liking the David Newlyn tape, fine warm/cold weird/sweet electronic avant pop instrumentals, and good length at 32 minutes.
Posted by Larry at 8:53 PM

I know, it was spelled "Harper" on the J-card...see picture...BTW didn't you write something about this show once?

I did write about this one. It's a good one. I spent the big bucks on the Dick's Picks edition. Those fuckers aren't cheap. Great show.

Great blog, man. I'm checking in on a daily basis.

Here's my new one: http://strawberry-flats.blogspot.com/

Had to dig up the dicks picks after reading this. Great, great show. I'd love to hear an AUD version.

I've been digging on Strawberry Flats for awhile J, keep it up! Any link to the Harpur thing you wrote? Are those Dick's Picks worth the price tag, liner notes or pics or anything? To this day I've never actually held one in my hand. Yeah, there's something about an AUD passed around on a cassette.... hearing one as mp3s on a computer just isn't right...