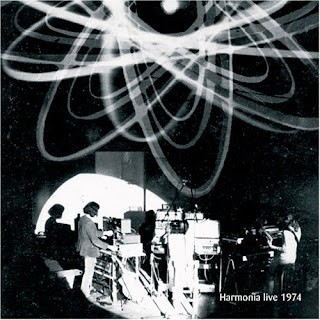 First time hearing this Harmonia album and it is a great supplement to the two awesome studio albums they made, Muzik Von Harmonia and Harmonia Deluxe. Recorded live, apparently in concert, "at their peak on March 23, 1974 at Penny Station in Griessem, Germany," they're basically doing the exact same thing as they were in the studio the previous November and following June - in fact the song "Veterano" from Muzik Von is played here, a fantastic extended version called "Veteranissimo"... as far as I can tell the rest is new material, although a couple themes sound familiar. Every bit as good as the other two albums, and in some ways better, with a rough-and-ready casual feel that sheds new light on those one-of-a-kind rhythms and atmospheres. Not to mention really good sound (must be a soundboard recording).... For those who read the Jay Bayles post a couple weeks ago, he has a friend who he knew back in Boston or San Francisco named Jim Cicatko who also still records music in total obscurity, now living in Seattle. Jay has given me two recordings by Jim over the years, one called Hammond Notebook from back in 2000, and now this one called The Vault that is a serious and impressive 68-minute piece of contemporary avant-garde classical music. The basic ingredients are loops and cello - it starts very drony and abstract but that old-world acoustic instrument can be heard in there, sneaking around the corners, and around the 18-minute mark it comes out of hiding for some utterly gorgeous overdubbed quartet-type shit before sinking back underneath drones and oddities. That's Jim Cicatko and fans of contempo avant/classical, not to mention indie stuff like Godspeed and Rachel's or whatever else, should be all over this. Oh hey, he has a website and he does more than just music.... man, "Space Forklift" and "Slow Talkers," the 3rd and 4th songs on the Kurt Vile album, what a lost-psych space-ballad one-two punch...
Posted by Larry at 6:30 PM

Hi Larry. J*st*n F*rr*r here. I noticed you're on a Basic Channel kick. Have you tried the Momentum mix on the Vakant imprint . It's not quite as dubby, but it's very much in that vein.