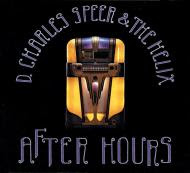 The fine folks at Black Dirt Studio sent along a vinyl version of After Hours to go with the CD version (on Sound@One) I listed last week - it sounds even better this way and it is indeed a pretty major work for the first quarter of 2008. We've heard the (supposedly) psychedelic approach applied to folk and singer/songwriter music plenty in these last couple years (with many hitting the mark, true), but has anybody really applied it to country/western/bluegrass music besides Mr. Speer? Does anybody else really need to? He's certainly doing a fine job - check out his 2007 LP Some Forgotten Country, a solo number in an all(or mostly)-acoustic backporch bluegrass style (note that The Helix are not credited), spaced-out and progressive, solemn and melancholy but usually played with what feels like a wise assuring grin. When Speer is backed by The Helix, as on his debut 7-inch and on this album, those traits are all still present, but the band is undeniably there to rock, all five musicians offering a key role. The lead guitar by Marc Orleans, piano & organ by Hans Chew, and bass by Jason Meagher do all the exploratory work out at the edges of the songs, while the drums by Robert Gregory and rhythm guitar by D. Charles Speer hold 'em down on the inside, rangy tunes played with a loose but strong hand that allows plenty of space for their stories and moods to get established. In fact, this LP version comes with a lyrics insert, so now I can finally tell what he's saying about Randolph Healy from psych ward room 302 on "Past Or Beyond" (as originally heard on the 7-inch - B-side "Canaanite Builder" is on the CD but not the LP). I had a feeling it was amazing, and it is, especially when delivered in his casual croon over the pleasantly resigned ramble of the song: "In the days 'fore you wore this prison garb/You dreamed of ruling Hong Kong/Armored junks patrol the harbor/But this vaunted private army never got too strong/All the times you ripped your friends off/In the name of getting kicks/You'll find a reminiscent figure/In Randolph's sermon on the tick/Sucking blood from the body of Jesus/Scheming death behind closed doors/If they taste cloven hoof in the soup/You know they feel so much better/Got to get back in the limo/I need that plastic feather."

Also checked these out from one of the key groups of the 21st Century:

Now for the raw shit, ODB at the absolute top and bottom of the game:


And you gotta watch this two-part interview at Park Hill: