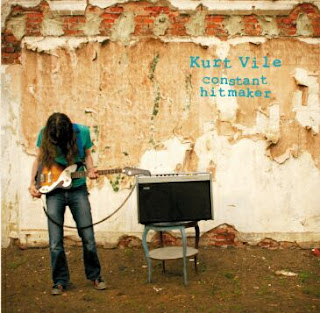 Okay, Kurt Vile.... never heard of him before, but he's "Philly's constant hitmaker," a one-man band, maybe even a singer/songwriter, new CD on Gulcher, props from Tom Lax, okay I'll give it a listen, and what do I hear but 1980s-style one-man pop-rock, earnest strums over radio-ready drum machine, and for a second I'm not sure what's going on, but I think something's happening, something beautiful and home-recorded, and a few seconds in when he sings "I got a freeway mind!" into a reverb mist, it's practically the hook of the year, followed closely by the line "I've got a trumpet/I know where to dump it".... And indeed, the hits just keep (constantly) coming, there are so many excellent songs on here that I'm putting this right up there with all the other home-psych curveballs I can think of from the last decade... Jakob Olausson's Moonlight Farm... vintage lo-fi Guided by Voices... Flying Canyon (RIP).... there's even this hollow-but-bubbly electronic undercurrent (including a couple short avant interludes) that I'm tracing to, like, mid-period Cluster... I know, right? And I just now got the joke, that his name is a reference to Kurt Weill, that cabaret composer or whatever beloved by Tom Waits fans and anyone else who listens to NPR. No thanks, I'll take this Kurt Vile, the one from Philly... (and hey, in case you haven't noticed Gulcher is really on a bit of a roll with this Newline series....) Jeez, I've had two listens to this most recent Charalambides, both at work and not fully attentive, but I think this thing might be a masterpiece. You could say it's their most accessible album, with Christina taking her most traditional 'lead singer' role yet (every song has lyrics taken from old-time traditional songs), but at the same time more psychedelic raw nerve is exposed than ever before, mainly because they never really go for the loud wash-out, instead leaving everything still, sparse, trembling, and vivid. The vocal and electric guitar performances are totally heroic - if I have any complaint it's that the music is way too intense for the album to be 70 minutes long.
Posted by Larry at 5:43 AM