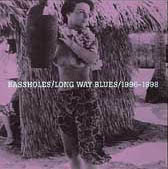 I truly love this Bassholes album. I missed out on the Gibson Bros when they were happening, not to mention the first three Bassholes albums, so this album on Matador became my introduction to the genius of Don Howland. I checked out a couple other Bassholes things after this but nothing matched it - I think because only 4 or so songs on here are 'band' songs (the band being the raw duo of Howland and drummer Bim Sherman), and the rest are Howland solo, super-lonesome weirdo 4-track songs, usually just a couple eerie and hollow electric guitar tracks, with Howland sorta croaking out the words in a bone-chilling quiet style, like he's trying to hide the songs from his kids upstairs (you can hear them stomping on the floor above his basement 'studio' during one track). And with some of these lyrics you can see why he would hide 'em, stuff like "Did I really kill my wife/Or was it just a dream?/It felt like being there/Purple is the color/Of her lover's pubic hair," or "I loved you/Your tits and arms/Je t'adore/Your tits and arms," or "Afrodite, your hair bushy black/The love in your brown eyes is stronger than crack/Born of Uranus's castrated schlong/Your magic girdle has inspired this song." The album closer "Turpentine" has some incredibly bad-ass rock'n'roll lyrics like "Some folks like water/Some fucks like wine/But me I like the taste of uh TURPENTINE". And of course, there's always the horrific revenge song right before that, "Angel of Death," which I'll just let you hear for yourself some day. So, maniacs, tell me, does Howland have any other recordings in this particular shivery style? Didn't he release an album as Don Howland at some point this decade? Maybe it's similar - I wanna hear it no matter what it sounds like, but this shivery spooky fragile stuff w/the sick lyrics is amazing. Nest is a New Zealand duo of Andrew Scott, who now lives in Los Angeles and is also part of the excellent Metal Rouge duo, and one Nigel Wright. On this 3" they collaborate with another NZ artist called MHFS on an excellent little 12-minute power-glow drone piece. I mean seriously, it's good shit - here's what Mr. Scott himself sez: "Keep an eye out for MHFS - all his best stuff is out of print, but he's a fucking genius and NZ's best kept secret, I cannot rate him highly enough...."
Posted by Larry at 9:18 PM

long way blues is howland's favorite and it's the best. the haunting-factor really cranks up the personality that isn't as clearly there w/ the more rocked out records, though i love those too. the solo record on birdman (some very short lived label did the vinyl version)is right there w/ long way blues. haunted hill and death mix are hard to beat as well. and the singles, god damn! howland is way to weird for the white stripes folks and too steeped in tradition for the "innovation" preoccupation folks. he's a fucking genius.

there is rumor of a collaboration w/ the black velvet fuckere crowd in louisville!

Thanks for the tips dudes - yeah the first time I saw the Bassholes name was in a Revenant ad, I think the "RAW MUSIC, PUNK" one. And I think your post Farrar is the first time I've heard of Wooden Tit, their myspace tunes sound excellent... It seems like I'm always 5 years behind on what Howland is doing, non-promotion at its most respectable. So his solo disc was on Birdman, a fairly known label, and I just saw that some unknown label did a singles comp - I never see this stuff around, time to start looking... Anon: keep us posted on the BVF Summit and say hay to Sir Abplanalp!