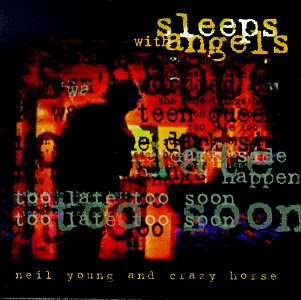 More Neil, this time with the Horse.... Sleeps With Angels is a sick album, underrated I think. Some of his grossest guitar playing matched with extremely bleak songwriting. 1994....I don't believe I've heard a single album he's recorded or note he's played since...I'm sure there's some more that are at least decent, but I'm not done listening to his first 25 years of recordings... plus I was digging around some old cassettes at work and pulled out The Bridge, the Neil Young tribute album from 1989 that sort of started a small fad for tribute albums in the 90s. No wonder, it's super good, I'll take notes: Soul Asylum doing "Barstool Blues" is great, mainly because it's such a great song, but still... Victoria Williams does "Don't Let It Bring You Down" and her strange little southern elf voice is perfect for the song. Flaming Lips doing "After the Gold Rush" is close to perfect, especially the way they bookend it with those Z-grade UFO-landing drum solo sections. "I was hoping for replacement," what a beat line. Fuck, Nikki Sudden doing "Captain Kennedy" is actually better than the Neil version. Speaking of beat, incredible weird ballad singing, tinny but triumphant guitar leads, what a take. "Cinnamon Girl" by Loop is OK. Nick Cave doing "Helpless" is fabulous and so is Bongwater doing a collagistic dream-ballad version of "Mr. Soul." Fuck the Pixies. I love the idea of Sonic Youth covering Neil Young but "Computer Age" is a somewhat disappointing choice and performance. Psychic TV doing a 6-minute "Only Love Can Break Your Heart" is maybe the 2nd or 3rd (or 1st) best song on here. I love it when Genesis sings lead. "Lotta Love" by Dinosaur Jr. sounds really Gaffney-damaged, is this actually by Sebadoh? Henry Kaiser does the overdose medley, "The Needle and the Damage Done"/"Tonight's The Night," and though it teeters on the brink of Laswell-esque avant-cheese in a couple places he pulls it off well. Good listen. The Body Vehicle tape has been around for a couple years and I'm not sure why I never reviewed it. I think I was just too baffled by it. It's two people from Rostov-on-Don, Russia and they would ostensibly be a noise group, but the tape starts with like four minutes of melodic/ecstatic wordless singing through tons of effects, almost like Linda Sharrock plugged into Kraftwerk's vocoder or something. The tape continues on to other things like the more expected drone-fields and static-scrapes (including some weird almost-rock guitar playing at one point), but then there's five minutes of unaccompanied spaced-out treated sax (or bass clarinet?) soloing that wouldn't be out of place on the Anal Magic album. And then there's a track that sounds like the mating rituals of swamp-dwelling dinosaurs. I mean, exactly. Like a field recording. It's on an American label, Nightpass Handmade Records. Ulaan Kohl CD is starting to click with me at home, digging the dusted/ragged shortwave-broadcast tone. Brooding and fiery instrumental psych-rock that sounds overloaded and expansive but also small and compressed and distant, an eerie combination.
Posted by Larry at 3:31 PM