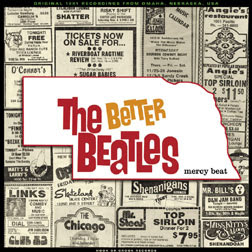 Axa Hour of Dora Blue is a Montreal band on the Fire Museum label. This label has an excellent track record over the last couple years (Pulga Loves You by Pulga, Madras 1974 by the Nathamuni Brothers, Whose Dream We Live In? by Keijo, and Astral Voyager by Comet III are all very good) but this one will have to grow on me a little bit more. The focus is the singer/songwriter Dorothy Geller, who was in From Quagmire (heard of but unheard by me). She plays guitar and sings and does have a strong presence, playing sparse, lengthy, and somewhat forbidding folk-type songs that lean into cabaret/Euro/avant styles, backed by a wandering and subdued electro-acoustic jazzish combo. Hell, that doesn't sound so bad, maybe I should listen to it again.... Ah, the Better Beatles...so glad that Hook or Crook put this record out. I'll never forget the first time I heard this band...I was doing a Lincoln, NE community radio show in 1999 or so and a special guest 'older dude' showed up with some records, including a 45 by a group I'd never heard of called............the Better Beatles. "Good name," I said. "Play 'I'm Down,' man," he said. I did and it was one of the best songs I've ever played on the radio to this day, a super-awesome nervous/driving deadpan synth-wave non-cover from 1981. "Who were these guys??" "They were from Omaha!" he said. I couldn't believe it, although then again I could because I lived in Nebraska for 13 years (1988-2001) and there was always a core of 5% or so of the music scene that was into weird shit. The Better Beatles CD (there's an LP version too) is about 30 minutes long and features 10 tracks they recorded in their 12 weeks of existence. The overall tonality is clearly more "new wave" than it is "punk" but there's something magical about the sheer bleakness and disdain of the delivery that is deeper than punk and just about everything else. At that point I hit an awkward stretch of listening - well, Pop was glorious as always but Mors Mors on the train was a strange disappointment (which might just be because I need to get some real headphones for this thing), and then at home the Fursaxa album had the quality harmonium drones and mystic moans, but it didn't really seem to have any songs on it. Then things picked up with Villalobos as our cooking and eating music and those brilliant constantly cycling themes on side one of Nefertiti for after-dinner/clean-up. At that point Angelina had to hear my new Better Beatles disc (she's an Omaha girl, born and raised) so I played it for her while we checked out the cover art and its xerox from the World-Herald ad section, all these old-school East Omaha Italian steakhouses we used to eat at like Caniglia's and Angie's. Got a chance to sit down and read the liner notes and interview by Jay Hinman with great stuff like "Q: What's your personal favorite recording from the sessions, and why? A: Paperback Writer. We did it in a more bleak and pleading way than the Beatles did. I felt we had a better grasp of the material. The Beatles original was so upbeat, as if they had no idea what it meant to find a fulfilling job that they could stand to do for three more decades."
Posted by Larry at 7:07 AM