It looks like the Lal Lal Lal label of Finland is putting out real CDs now, which is cool... but this new Maniacs Dream is just absurd, flagrantly thumbing its nose at the editing required by 12" vinyl capacity with one 48 minute track followed by another 23 minute track with basically no variance whatsoever in method/approach/attack, just three dudes making as much in-the-red Hijokaidan-style gtr/electronics/??? noise as possible the whole entire time (except for the tiny break of silence in between tracks, which almost sounds like the whole band just stopping on a dime to take a collective breath before diving right back in, which made me laugh but it's a pretty small punchline considering it requires almost an hour of setup)... I personally like Lal Lal Lal music best when it works from a 'beertrance' backbeat/pulse, simple as that, but maybe, just maybe, this total blitzing metallic zonkerosity that not many can or would rival does indeed become its own kind of (anti)pulse, a monument to absurd excess too large to ignore... what an endurance test... I mean I will listen to it again, ha ha.... at least once, heh heh... I mean the noise they produce is very, ha ha, PSYCHEDELIC, ha ha ha....(looks around nervously)... the artwork is notable/weird/random as always, the usual inscrutable pictures of urban/suburban Finland life (basketball hoops, sweatshirts, a motorcycle, home decorations, a thanks lists longer than some hip-hop albums, a Basil Wolvertonesque drawing of a crazed dude taking apart his own head on the cover... scratch own head NOW).... I haven't seen Saint Julian's Japrocksampler book yet but he's got the shareblogs buzzin' and I've checked out some of his Top 50 Japanese rock albums that way - thumbs up for his #14 pick Nipponjin and its lush symphonic space prog with synths, strings, heavy guitar, spacey vocals, side-long epics.... even the four-minute songs sound like side-long epics... 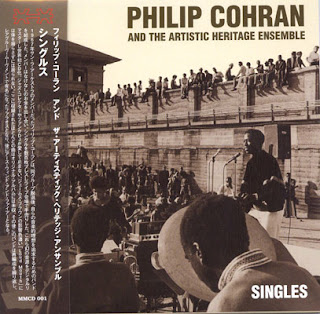 I've been needing to make a Phil Cohran post forever. I keep getting reminded because he lives just a few blocks from me and I see him walking around, plus I see him play on Friday nights at the Ethiopian Diamond restaurant a few times a year, but it's hard to know just where to start with this guy - he played with Sun Ra of course, he was a founding member of the AACM, members of his group the Artistic Heritage Ensemble included awesome Miles Davis electric guitarist Pete Cosey and future members of Earth, Wind & Fire, he founded the Affro-Arts Theater Black Culture Center in Chicago from 1967 to 1970, he just turned 80 years old, he has 19 sons, 8 of which are in the great Hypnotic Brass Ensemble, and again, he still plays for free every Friday night at the Ethiopian Diamond (6120 N. Broadway Avenue, Chicago, also serving fine food, a little pricey but hey), he's got a MySpace page... Ah, but today I actually do have a place to start because some new vinyl-and-CD Cohran releases/reissues have come out, and I skipped lunch today and took the bus from work to Dusty Groove and bought what they had, the sweet Malcolm X Memorial gatefold LP on Mississippi Records and the Singles CD on a Japanese label called Midday Music. (They also have a new CD-only reissue of the self-titled Artistic Heritage Ensemble debut album, commonly known as On The Beach (on the Chicago-based Katalyst Entertainment label that also did a new CD version of Malcolm X Memorial), but I already have that one - when is someone gonna do it on vinyl?) When I got home, before listening to this stuff, I decided to go all out and set the stage with what is actually my favorite Phil Cohran album of all, African Skies. This has never been officially released, but Cohran makes a CDR version which he sells at the Diamond, which is where I bought it. The cover says "Soundtrack album for The Adler Planetarium Sky Shows," and apparently it is still played there every day, which may have something to do with the lack of an official release, I don't know. It doesn't have a recording date on it, but this page says it was composed in 1987, and the harpist on the session says it was recorded in 1993. Either way, this is magical floating music that easily evokes visions of Africa, its history and prehistory, the flora and fauna of its vast landscapes, and of course deep astronomical visions of the starry skies above. It doesn't have the heavy-brass soul-jazz feel that the Artistic Heritage Ensemble music does - this is something more meditative and haunting and beautiful that is closer to the solo music with backing tapes that Cohran plays at the Diamond. Seek it out! (Reckless has copies for mailorder (and for walk-in if you're in Chicago), along with some other self-released Cohran stuff that he recently brought in himself - am I gonna have to take the bus down there tomorrow??) And now on to the new stuff... the Malcolm X Memorial LP was recorded live at the Affro-Arts Theater on February 25, 1968, and it ended up being the follow-up release to On The Beach when Cohran pressed up 1000 copies in 1970. I've been hearing good things about this Mississippi Records label, and this reissue is very nice, adding a gatefold that features a great color photo of the AHE in action, as well as what is probably the best article on Cohran I've yet seen, by Nigel Ridgeway of Ground Lift Magazine. As for the music itself I can't believe how ambitious it is, telling the story of Malcolm's life in four parts, starting with blues and jump music on side one (to represent Malcolm's boyhood and years as Detroit Red), and then moving on to sweeping epic dramatic vistas on side two (representing his political and spiritual awakenings, his charisma and leadership, his assassination, etc). Great stuff, and according to his MySpace it looks like Cohran is going to play a version of this with a backing band on February 16th at the Heartland Cafe - I can walk there! I'll let you know how it is. As for the Singles release, it's great too. Unfortunately there's really no info at all on it - maybe if you can read Japanese there is, I'm not sure, can anyone tell from the label's webpage? I haven't come across any discographical background for any 45s that Cohran may have released, and it's kinda odd that there's 7 tracks on here and not an even number, right? Maybe he released a one-sided 45.... Not that I'm complaining too much because these tracks are great and I'm glad to hear 'em regardless. "The African Look" is "dedicated to all the sisters who are governed by European styles and the brothers who like it" and has a brassy and proud strut when the AHE ladies (Mrs. Ella Pearl Jackson and Patricia Ann Smith) sing "The African Look is beautiful!" Cohran's frankiphone (an electric thumb piano that he built himself) has such a burning sound on "Loud Mouth," you might just put away your Konono No. 1 records for awhile... two songs from the Malcolm X Memorial appear here as well, and might even be the same versions as the LP - same goes for "New Frankiphone Blues" from On The Beach... anyway, that's it for now, I think I'm finally done with my long-needed first Philip Cohran post... more to come I'm sure.... 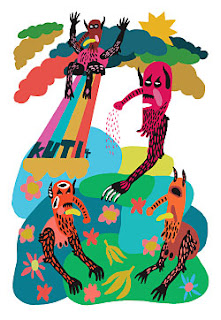 And to close out this post with some eyeball kicks/reading material, in this Lal Lal Lal package they threw in a couple issues of a foldover newsprint style graphix/comix mag called Kuti, and it's pretty exciting stuff. LLL label head, Avarus member, etc Roope Eronen is on the Kuti staff and contributes his own super-colorful weird-animal stories along with a bunch of other artists, and the whole thing pops with a ragged psychedelic feel that seems directly analagous to the Paperrad/Fort Thunder US scene. The comics are all in Finnish but English translations appear at the bottom of each... for more check their website.... and finally while at Dusty Groove I also grabbed the brand new issue of Roctober, the long-running mag by Jake Austen of the great Chic-A-Go-Go TV Show. I've barely dipped into it but highlights look to be interviews with Dickie Peterson of Blue Cheer, punk/horror artist/zinester Dennis Dread, and of course all of the ephemera that this mag always bursts with so charmingly. Also the editor's note is inspiring, in which Austen talks about how "as many of you know, the small press world is in pretty brutal shape these days" but concludes with "Basically, we have decided that we want to publish forever, and we're just going to have to figure out how to do that. Your subscriptions help, as does your love, so keep them both coming, tell your friends, and most importantly, enjoy the magazine!" Will do!
Posted by Larry at 5:54 AM

I asked Scott Harlow of the Midwest 45s website what he knew about the Cohran singles, and he got back to me with this discography of the Zulu label:

Zulu No. 0005 Spencer Jackson Family “Ain’t No One Gonna Treat Us Like They
Used To” / “ Sometimes I Feel Like A Motherless Child” (with Philip Cohran & the Artistic Heritage Ensemble)

I HOPE TO MEET YOU..AFTER THE SHOW YOU CAN ASK BRO PHIL ANY ? U WANT...Lavon of Sol Cyrans

WITNESS THE EVOLUTION OF BRO PHIL'S BAN...THESE BROTHAS GOT SWAGGER!