Having the Tower Recordings album come up on shuffle this morning was quite synchronicitous (if that's a word), as just the other night at the Kurt Vile show the Os Mutantes song "Delmak-O" came over the PA in between bands, and as its lovely tones and incongruous mid-song raveup emerged through the bar noise I remembered what a great song it was, literally the only Os Mutantes song I've ever liked, and how I was introduced to it in 1998 by a Tower Recordings cover version, track two of the Furniture Music album, and how I should pull that album out and listen to it for the first time in years. Well hey, thanks iPod, no pulling necessary... but it's funny about Tower, I did listen to their Fraternity of Moonwalkers album a couple times recently, and it didn't really hold up for me. In the mid-late 90s, when I listened to it a lot, it was pretty exciting, I guess because Matt Valentine was, as Dave Keenan would have it, "inventing free folk"... still, MV then was more of a sketch artist, a ringleader, a sweet guitar player, but not exactly a strong tunesmith, not the kind of guy who takes hold of a song and stuffs it into your soul, more like a guy who makes cool flickering patterns when you close your eyes. Which is cool, but not too deep or heavy, and to me it hasn't stood the test of time. This is still their best album though, or 2nd best behind their would-be swan-song big-band six-song jam-out released on LP and CD in 2004 as The Galaxies' Incredibly Sensual Transmission Field Of The Tower Recordings.

Okay, okay, I enjoyed this Blank Dogs cassette EP alright. It ended 45 seconds ago, and I think I can still remember how one of the songs went, which is a first.

I love it when I'm listening to a Roxy Music album and random Bryan Ferry lyrics pop out like "Through silken waters my gondola slides/and the bridge... it sighs." Not to mention, "Tous ces moments/Perdus dans l`enchantement/Qui ne reviendront/Au Jamais, jamais, jamais, jamais, jamais..."

May not've checked out Dutchess & the Duke but the main Termbo guy was so genuine in his year-end love for their debut album that I went ahead and did it. I don't think I'll ever like it that much, but there is some undeniably good songwriting here, however indebted to Jagger and Davies it might be. The "You fucked me in a phonebooth" hook really works. Haven't heard their new album, Sunrise/Sunset, which came out last month.

Brief thoughts on a few more new records... Dialing In is one Seattle woman doing some field recordings/loops/pedals/vocals overlays with a wild dark atmosphere, powerful and interesting but also kind of all over the place and confusing. For example, I'd like to tell you the name of one really good track with this grinding looping low-end, and I think it's on side B, but the sides don't have any text on the labels, or even "A" and "B" in the run-out etchings, and both sides appear to have 3 tracks (judging from banding) but there are 7 titles listed on the sleeve... so I really don't know what the track is... that's what I mean by confusing. But it's 'good confusing' enough that I want to listen again. [Though it's now a couple months later and I can't say that I have - ed.] The Tom Karlsson LP is really good, rather disturbing, and reviewed elsewhere. Enumclaw is a member of the Philly synth/kosmische band Niagara Falls playing solo. His LP, like the parent band, is extremely faithful to its inspiration, which is 1970s synth-based German cosmic music, no more, no less. So still no points for originality, but the album does get some for beauty, with long tracks that sit in a nice simple compositional space that's a little more tranquil, direct, and memorable than the most recent Niagara Falls LP, Sequence of Prophets. 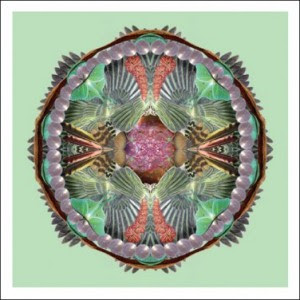