"Kassie Jones" by Furry Lewis seems like it's 10 minutes long, with a totally circular feel as the guitar part cycles and lyrics come and go, always changing while the rhythm stays the same, occasionally landing on a refrain ("On the road again... I'm a natural born Eastman on the road again") while interesting little chestnuts bubble in and out of consciousness. ("I ain't good lookin' but I take my time" . . . "Memphis women don't wear no shoes" . . . "Gonna shake it like Cheney did, like Cheney did.") It is over 6 minutes long, which makes it the longest song on the Anthology, I think. Here's the first half of it:

And here's a version he did 40 years later:

The Horner Park Jazz Band, a 14-or-so piece big band of all kinds of delightfully casual veteran amateur musicians, really made my day today at a fall/harvest/pumpkin type festival in Chicago's own Horner Park. Two guitars (one lady who strummed chords the whole set, couldn't really hear her, and a guy who played some sweet leads here and there), plenty of brass (including crucial baritone sax), a guy playing a well-miked piano that had been wheeled outdoors... I would say the (excellent) drummer was a good 70 years old, and the kit he was playing might've been even older... honestly, hearing them interpret swing classics reminded me of a Sun Ra band doing the same, the better players carrying along the lesser players with a lot of soul/spirit/fun. 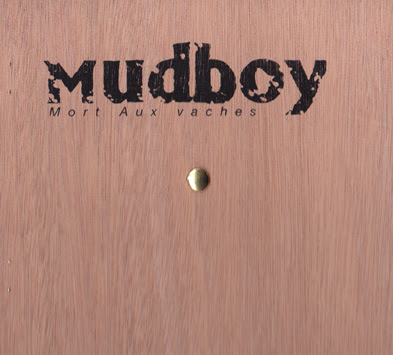 New Mudboy album is a good one, to these ears his most solid long-player yet. Does not come across as a solo keyboard album quite as much as This Is Folk Music did, but yet still hits hard with plenty of heavy solo organ. A couple quirk-threatening 'carnival' moments, or at least one early on, but he stays the course with focused material, does some interestingly evil-sounding things with heavy vocal breathing, and then builds that bridge from the 1960s to the 2000s with pulsing celestial monochord zone-out for most of the last half of the album. Comes in an tri-hinge plywood deal. (Oh, I guess Mort Aux Vaches is a series Staalplaat releases in collaboration with the Dutch radio station VPRO. The name is French for "Death to Cows," which is the French equivalent to "Fuck the Pigs" and it comes from May 1968.)

Speaking of casual, still can't believe how casual Television's 1975 debut record "Little Johnny Jewel Parts One and Two" was and is. And how much great jamming it exudes regardless.

I have an issue of Penthouse from around the time 'Little Johnny Jewel' 7-inch came out. It's in their 'ones to watch' section. Very hip! Crux of the piece was 'Television is awesome, but nobody in the music industry will touch 'em, so buy their record from the band by mail!' Tells the anecdote about the A&R guy who went to see the band with his son, his son went 'I don't like this band, Daddy,' and that was all pops needed to hear -- walked right out. Anyway, it's nice little moment-portrait.

Oh, and thanks for 'Mort Aux Vaches' translation, too!

Nice! Kinda curious now what the history of buying records by mail is... did it happen before '75? Anyway, you'll have to show me that sometime! It'll be the first time I go to a friend's house to look at a Penthouse magazine since I was 11!