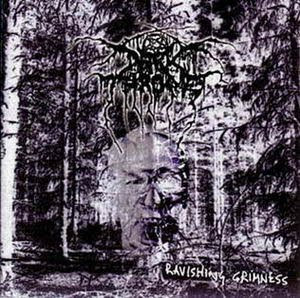 Ravishing Grimness was the first Darkthrone album I heard, and now, almost ten years later, it might just have turned out to be my favorite of theirs, which means that it's more or less one of my favorite of all black metal albums. I realize that's a controversial opinion... this album probably isn't even considered black metal... where's the style police when you need them? Anyway, it's got epic tunes, most of them up around 6 and 7 minutes in length, and most importantly with a rock-solid and simple low-end riff approach as opposed to the tinnier tremelo-picked atmospheres of some of their other releases (and black metal in general).

Frost and Fire is the debut LP by Cirith Ungol, self-released in 1981. It's good, but not as doomy overall as their 2nd album King of the Dead. In fact, there's a post-Aerosmith proto-G&R rat-skank funk-metal undercurrent on this one, at least in a couple places, most egregiously track 6 "Better Off Dead." Not that there's anything wrong with that... and there are other good and better tunes on here, too ("Frost and Fire" and "I'm Alive" are great crawling Tim Baker screech-power anthems), but even with the 7-minute absurdly-titled two-guitar instrumental ballad "Maybe That's Why" being a particularly nice, gross, and uncalled-for album closer, it is still the King of the Dead that reigns supreme.

DC Go Go music doesn't really make it out of the DMV (that's D.C./Maryland/Virginia, I read it on urbandictionary.com)... here in the Midwest you have to go and seek it out. Last time I checked in was 2002, when this documentary called The Pocket, made by a couple DC hardcore/indie guys, played at the Gene Siskel Film Center... I don't think it's on DVD. It was a pretty good film, though next time I'd like to see more music and less Rollins and Mackaye... you know, "less talk, more rock." What I remember from the few occasions where a performance clip broke the 2 minute mark was something a lot different than the upbeat and bouncy EU/Trouble Funk stuff that made brief pop-chart appearances in the 80s, more like a lumbering beast emerging from shadows like an unholy cross between rap music and stoner metal with absolutely nothing to do with the Judgment Night soundtrack. Maybe it somehow came from the same place DJ Screw was coming from when he slowed hip-hop down into a dark dank beast around the same time in Houston. Tonight I was thinking about that sound (still haunting me 7 years later) and started poking around for it on YouTube, and got into this Reaction Band stuff, which is going on right now, and it's even crazier, that world's-slowest-steamroller feel developed into something progressive and symphonic, like an epic pop music, without sacrificing any of the brutality. Forget any kind of hip-hop related head-nod backbeat, groove or tempo, this is surging music with a life of its own that seems to follow the heavy chanting and swaggering of the vocalists. Throw in all the percussion that has always marked the style, heavy psychedelic echo on the mics, over the top church/soul singing shot through with super-raw sex lyrics, cinematic keyboard interludes (and sharp horn-section stabs once the rhythm gets going), an uncanny ability to layer tempos (double-time bounce on top for the dance floor and that monstrous half-time underneath, really a doom backbeat if there ever was one, for working the room), and then take it all to the stage, "every Friday night":

Love this "swag beat" with the flute hook, it surfaces throughout the Le Pearl vids... kinda reminds me of Kraftwerk "Ruckzuck"!

For some reason I have "Green Grass & High Tides" on my iPod, and nothing else by The Outlaws. Wait I know why, it's because the song rules. During my youth I always appreciated when this song came on late-night deep-cut classic-rock radio out of Omaha. Hell, I always appreciated it when ANY song longer than 9 minutes came on the radio. Still do, on any station, anywhere.

As I previewed in yesterday's post, seeing Kurt Vile & the Violators live last night really got the Childish Prodigy album to click for me today. I was already coming around to it, as early as the second listen, but man, now it just sounds perfect, from the slow, bellowing new version of "Hunchback" that opens it (including the lines "slither up just like a snake upon a spiral staircase," borrowed from another Kurt song "Beach on the Moon," which is itself a melancholy solo reworking of Kurt klassik "Freeway"... what kind of fractured mosaic is this guy putting together?), to the weird fingerpicking shouter "Dead Alive" that follows it ("You tell me a good man is hard to find, what was that??! YOU BETTER REWIND!!!!") to the lovely "Overnite Religion" and it's Jimmy Page undercurrent (an overcurrent in this performance), to the epic trance anthem live favorite (and debut video!) "Freak Train," to another Zeppelin III style solo ballad called "Blackberry Song," to the rather gloriously shoegazey Dim Stars cover "Monkey" (never heard the Dim Stars, always thought it would be more aggro than this), to "Heart Attack" which opened last night's show so well, to "Amplifier" (more Zep 3, this time with some of that trumpet he didn't dump), and then the key late-album head-turner, the 6-minute plus "Inside Lookin' Out," which floats the album home on a Bo Diddley-beat magic carpet, powered by Trbovich's spacey harmonica and Vile's serious blues shouting. The way he sings "GOT THE BLUES SO BAD!!!!!" and how well it works makes me wonder how Vice Magazine could call this album "blues rock" as an insult. 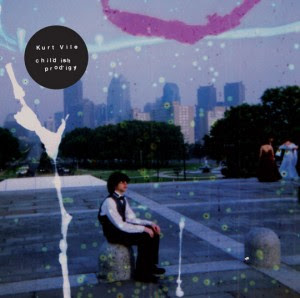