Buhloone Mind State is so good. It might not be the best De La Soul album, but I think it's the one I listen to the most. And it actually might be the best. "Breakadawn" is certainly an unbelievable tune.

Mind currently being blown by the original 1975 Moki Cherry tapestry sleeve for Don Cherry's Brown Rice album. I didn't know this existed, or that it was a 70s album... due to the funky/synthy nature of the title track, I always thought it was an '80s release and that weird DC photo on the CD was the original cover. Behold: 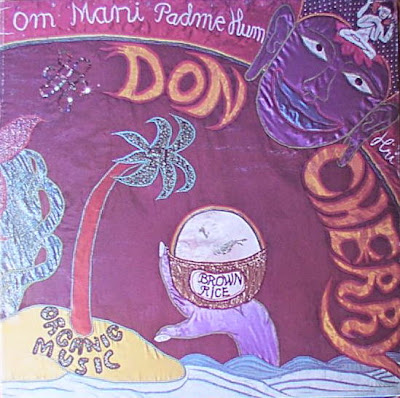 Also turns out I was DC-uninformed in another respect, as I had no idea he ever had a heroin habit, let alone an alleged 20-year heroin habit. (He used to score for Billie Holiday, says Tessa Pollitt.) Now I'm finding people on the internet saying "Brown Rice" is an ode to H... man, I always thought it was strictly an awesome ode to the joys of organic whole foods.

Pssst, hey, all you folks like me who dig Antony & the Johnsons but aren't supposed to talk about it because your buds only listen to Aussie punk or something, this Another World EP is seriously good. It's only five songs, but it's right up there with the masterful I'm A Bird Now (although after one listen a while back I don't think the newest full-length The Crying Light is quite as strong, correct me if I'm wrong about that). Anyway, I don't see why anyone who digs say Roxy Music Stranded and Arthur Russell World of Echo, to name a couple, wouldn't dig this.
Posted by Larry at 5:53 AM