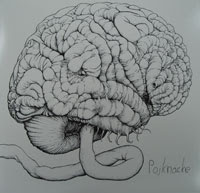 TOM KARLSSON: Pojknacke LP (LYSTRING) Not sure where this LP is from, but it came fairly anonymously, in a stark white gatefold sleeve adorned with meticulously repellent hand-drawn artwork, at least on the inside sleeve and the labels, and I kind of wanted to listen to it once and get it out of the house... but the music is excellent. Having lost the one-sheet, I was thinking it was an album by sort of mysterious harsh industrial/power electronics band or project called Pojknacke, but the internet tells me that Pojknacke is the title, and the artist (musical and presumably visual) is actually Tom Karlsson. Hey, at least he was helpful enough to draw "A" and "B" as part of his label art, no one does that anymore! (And his name is on the spine, along with title and label, I just hadn't checked yet.) Anyway, this really is some sort of early-style harsh industrial album, but with a welcome profusion of quiet space, room for some jarring off-kilter samples, obscure but agitated European speaking voices that may even be samples themselves but mostly probably not... eventually some serious subtle (on side B not so subtle) heavy avant-rock improvisational jamming... a couple out-and-out tunes with goofy ranting punk vocals... it doesn't all work equally well, and it's maybe 10 minutes too long, but it's still really good.
Posted by Larry at 9:47 PM

larry@blastitude.com doesn't work as an e-mail address -- I wanted to send you a bit of e-mail and I wasn't able to. Correct/update your contact info at blastitude site? And if you could drop me a message at pocamadreent@hotmail.com I'll be better able to pursue my agenda...

My apologies Hugo, and to anyone who has used the larry at blastitude dot com address... I haven't updated any of those pages in a couple years because it's all a poorly organized html mess, like a couple thousand copies of an old print zine with incorrect info... so everyone make a note, the all-time #1 correct e-mail (for now) is blastitude at yahoo dot com... check your e-mail Hugo