SIR RICHARD BISHOP Plays Sun City Girls 7" (NO-FI) This is a great record. When it first came out I passed on it, I mean I already have a good 30 Sun City Girls releases not to mention 5 or 6 of Sir Rick's, but I got lured into Reckless on Milwaukee Ave today by the new Eddy Current Suppression Ring LP and there this was in the used bin for $10.99, and here I was with a good $80 in credit burning the colloquial hole in my wallet, so boom. Not the cheapest price, but considering one is on ebay right now for $14.99 with one bid and a couple days left, not bad. SCG records really are worth some money, it's just that simple. But anyway, I knew this would be a good record, a fine record, but it turns out it's a great record - Ricardo is ON, just sitting in a chair and blowing through a fast and hyper "Esoterica of Abysynnia" and an exquisite "Space Prophet Dogon" on the flip. It also reminds me just how excellent their new Brothers Unconnected tour-only CD is, this time both Rick and Alan sitting in chairs, blowing through 12 or 13 classics, including another "Space Prophet Dogon" for the ages. That CD is so good that even though it was released with no packaging, just a disc in a plain white tyvek window envelope, it's already going for 20-30 bucks on the Bay. (Check here first.)

TITMACHINE We Build A New City 7" (SILTBREEZE) Remember when I used to always quote my kids in reviews? Haven't done it in awhile, but Li'l Phil is 5 now and he likes rock'n'roll, so it was bound to happen sooner or later. Tonight I got this one out of the sleeve and told him it was gonna be "a little crazy." He says "I love crazy music!" I said, "Okay, good!" He says, "What's it called?" and I had to just chuckle and say it: "Titmachine!" He says, "Titmachine?! Alright, I love machines!" Perfect, huh? We play Side A "We Build A New City" and I say "It's not THAT crazy," because it's punk rock and he's fairly used to what can only be called out-and-out noise coming from the stereo, and in fact he comes back with "It's not crazy at all!" I'm sure he was just commenting on Titmachine's natural all-female Dutch-punk charm, because let me assure you, this 7" is pretty crazy. The A side title-track has a lurching harsh stun-bass groove and the high nasal vocal hook just grinds away, I love it. B side "1989" isn't as immediately classic but it's not a letdown either... a fine record.

BILLY BAO Accumulation 7" (XEROX MUSIK) I already have mp3s of this but when I saw it at Reckless I had to buy it in order to complete a Bao trilogy of sorts along with the Fuck Separation 10" and the Dialectics of Shit LP. All three records are great. With each one, the titles alone begin a manifesto that continues throughout the design and concept and words and is finished by the sound itself. Look at the way the Accumulation concept presents itself: 10 tracks, 10 titles, each title a little longer than the last, the titles printed down the front cover as a concrete poem (see below). Each track is exactly one minute long with a short break in between, and the music is wholly appropriate to the increasingly harsh imagery in the song titles. At first it practically sounds like Bao is bellowing vocals over a single pounding drum, but each track gets progressively denser than the last one, bringing in more and more guitars and noise and especially tormented vocal overdubs, you know, a succinct and visceral illustration of the process by which industrial and/or consumerist accumulation leads to self-immolation. (Alternate title in my head: "The Ballad of Malachi Ritscher.") 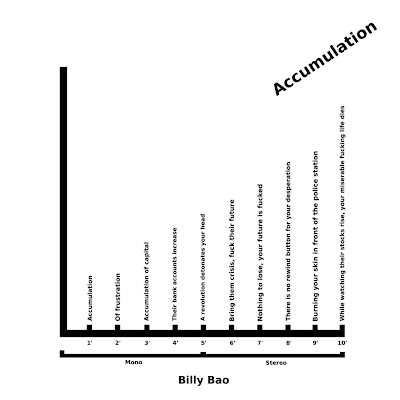 NED LAGIN/PHIL LESH SEASTONES LP (ROUND RECORDS) Stoked to find this LP from Phil Lesh's infamous 'harsh noise' side project in the Grateful Dead bin at Reckless. It was $16.99 for a cover in so-so condition, but hey, credit. Nice looking LP anyway - Phil (Dolman not Lesh) loved the cover, figuring that if it was called "seastones" the art must represent the sea through a microscope, tiny bits of sand, bacteria, and other things on the molecular level. We even read some of the tripped-out uncredited poetry on the back - "tingling/tip of/beach/downily/oceans of warm rustling/quivering up/thinning likeness/wave planes/splashing/water beads/her own tip/pointed/grass blade dripping/waiting..." Whoah, "her own tip/pointed"?! First "titmachine," now this... On the center labels the album is credited to Ned Lagin and Phil Lesh; on the back cover, there is just a band-style credit list, in which Lagin is top-billed ("written and composed by," not to mention "Piano, Percussion, Computers, Synthesizers, Keyboards*," and ahem, here's what that asterisk leads to: "*Interdata 7/16 computer with high speed arithmetic logic unit, Eu Modular Synthesizer, Arp 2500, Arp Odyssey, Electro-Comp, Buchla Modular System, Programmable Bioelectronic I/O Microprocessor (Intel 8080), prepared piano, clavichord, organ") while Lesh is second-billed with just "Electric Bass." Garcia is credited with "Electric Guitar, Vocals," Mickey Hart is credited with "Gongs," and that's it from the Dead; famous friends Crosby and Slick both lend vocals, and so do Freiberg and Dryden from New Riders of the Purple Sage. But I can't hear any of that stuff. All I hear is electronics and synthesizers, and often not much of that... it's a sparse haunting record and it seems to be Lagin's show all the way. By the way, I asked Li'l Phil what he thought 10 minutes in and he said "It doesn't sound like a record!" (Okay, second time through and I do hear the vocals, but they don't come along too often and when they do they're chopped up and nearly unrecognizable. I still haven't cracked the code as far as hearing Garcia's guitar, or the "Alembic Electric 12 String Guitar" that Crosby is also credited with... must all be processed to hell...)

EDDY CURRENT SUPPRESSION RING: Primary Colours LP (GONER) As I said, Reckless had this in stock and it was the bait that lured me in to the store. I was gonna order it direct from Goner but I figured this would be easier, and it was... but I didn't get colored vinyl. I don't usually care about that stuff, but this time I kinda did. It's so thematic for once..... Anyway, I already reviewed this waaaaay back in Blastitude #26 (here), they're one of the best new (minimalist) rock bands I've heard in years and it's probably going to be my #1 album of 2008. Vinyl sounds good. 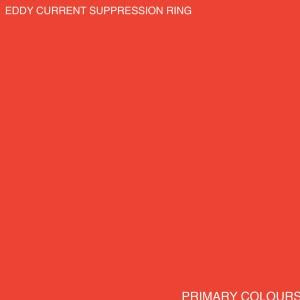 GRATEFUL DEAD @ Jai-Alai Fronton, Miami, FL, 74/06/23, 2nd Set, streaming @ Archive.org. And this is not from Reckless, in fact it's not even a record, but it was inspired directly by my Seastones purchase.... while spinning said purchase back home, I poked around the internet for any Seastonestories, of which there aren't too many (although this one is alright, as recounted by Lesh: "German audiences, when they don't like something, whistle. They started whistling because they didn't like it, so Ned just picked up on the whistling and started fucking with them - he made his synthesizer start to whistle, and he whistled along with them. Pretty soon, they were whistling with him and they didn't even know it. He has that kind of sense of humor."). I also pulled out the A Long Strange Trip book and learned that the first time Lagin and Lesh ever played it live was June, 1974 in Miami. Author Dennis McNally reports that feelings were generally positive if a little mixed about the debut performance, but that the second set by the Grateful Dead immediately following was exceptionally good. So I head over to Deadlists.com to get the date (June 23) and then zip on over to Archive.org to stream it... the Seastones set pretty much sounds like harsh noise to me, and McNally was right, the Dead set is pretty sweet. Very slow and mellow (this is only a month after one of their ultimate slow/mellow shows, 74/5/19 Missoula, MT) with a well-regarded "Dark Star." (Kreutzmann being the MVP... such a great drummer... on here he does some repeating martial trance rhythms that remind me of, I don't know, Ed Blackwell??)

(BTW thought I'd use this space to throw up a nice description of Grateful Dead music that I just came across. It's by Joe Gallant, New York City avant-jazz musician and smut producer of some reknown. I actually saw him play once in New York City, his huge 18-piece band Illuminati opening up for the Art Ensemble of Chicago, doing an over-the-top version of the whole Blues For Allah album. It was pretty impressive, sure, but I didn't really like it... I didn't know the album at all then, but I don't think that would've helped too much. Anyway, here's Gallant's description/tribute (it's from this page - the whole interview is worth a look, he's got a way with words and has led an interesting life): "The Dead's alembic contained it all: Rock ’n Roll, Country and City Blues, mountain music, whistling back-alley Burma-Shave Americana, rigorous 20th Century orchestral influences, terrifying dark psychological improvisations, jagged vivisectionist feedback, gentle Celtic whispers, flatfoot carny "Hey, Rube!" goofiness, Mideastern percussion textures. Like a canal city, their tributaries wend and twine." 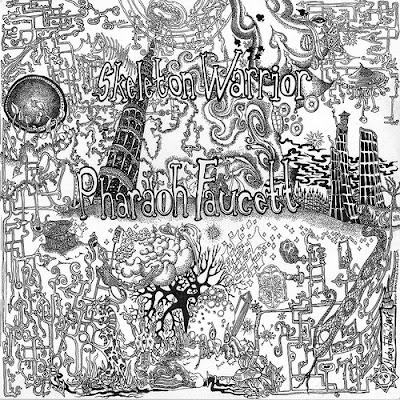 SKELETON WARRIOR/PHARAOH FAUCETT split 7" (ROOFLESS) This one comes from the weirdo Sarasota FL scene that showed up on the blog once a few months ago. Package had a Philly address, which is interesting - did they move there to be closer to the roots of today's weirdpunk? And/or to The Roots? Just joking, especially because they already seem to be doing fine at their own game, improving on the already good stuff they previously sent along. Skeleton Warrior play an extended rambling teenage tinkertoy psych-prog with constant scramble and wobble, refreshingly instrumental, with almost-melodic bloops and bleeps and surprise backwards-masking disorientation.... and right at the end an acoustic guitar anthem even emerges, nestled among the warping electronics. Somebody's gotta be the next Parasites of the Western World, is anyone else gonna step up? On the flip the rather absurdly named Pharaoh Faucett play it a little more straight-ahead, with a more standard post-nerd/farfisa panic rock style, but the blow-outage of the band and recording is notably aggressive, with classic male/female trade-off punk vox keening over the top. Works for me. Impressive psychedelic-maze pen-and-ink cover art too.

MARRIED IN BIRDICHEV 7" (GILGONGO RECORDS) This is by a woman who does music alone with voice and FX , with press-sheet comparisons to Grouper and Inca Ore, and the label is run by a member of that fine desert improv collective called Tent City, so I was hoping to like this, but... without all the weird sounds and electronic strangeness venting in the background, I just don't know if the songs could stand alone, like they would be unmasked as middle-of-the-road emo grunge ballads or something.

CALDERA LAKES CS (DEATHBOMB ARC) This is a duo of Eva Aguila, who records noise music as Kevin Shields, and Brittany Gould, who records as the aforementioned Married in Birdichev. The latter's grunge balladry tendency is still in evidence here, but it finds a more challenging and rewarding home in collaboration with Ms. Aguila. Side A "Silent Something" is a killer track, a slowly rising boil that comes to a head as Gould's singing digs deeper and deeper into real actual song territory. She sounds Christina Carter-worthy here, especially 3/4 of the way through when she hits the refrain of "Don't you do that" a few times, cueing Aguila to really stir shit up and turn the track into a full-fledged noise jam. Side B "Shotgun" threatens to take off in a similar way but never quite does... definitely would like to hear more though. 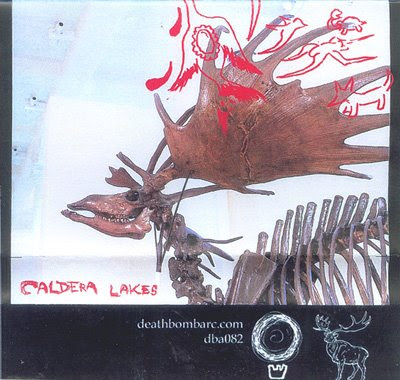 is it weird that i bought the titmachine 7" on saturday because i thought your son's comment was funny? it's pretty good!