PREVIEW FROM BLASTITUDE #27 (some record reviews)


PINK REASON: Winona 7" (WOODSIST) Apparently the 6-minute country dirge ballad "Winona" is the first song Kevin Failure wrote as Pink Reason. (Backstory on the song here if you missed it, scroll down to July 3.) I guess that means the version on the A-side of this 7" might have been recorded before he did the Cleaning the Mirror LP. Either way, much like that LP, "Winona" is Pink Reason in slowest-ballad downer narcosis-mode, which around here still means "exquisite." And Side B has two cuts, an excellent weird deep-voice paranoid song called "Give Yerself Away" and then a short shambling and possibly despairing good-bye that goes "It's aaaaaall over now...." over and over. Another great single by Pink Reason, simple as that. 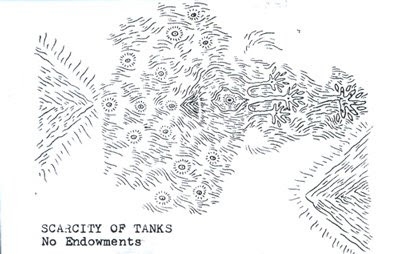 SCARCITY OF TANKS: No Endowments CS (TOTAL LIFE SOCIETY) Damn, this tape smokes. I mean it's practically a Saccharine Trust tribute album, but that's a pretty admirable target and Scarcity of Tanks hit a bullseye. Matthew Wascovich, whom you may know from his Cleveland-based Slow Toe imprint, writes and voices the fightin' words and, I assume, plays the screeching and cutting guitar (actually a little more Mark Morgan than Joe Baiza to these ears). No credits so I don't know who the rhythm section is but it is most definitely bass and drums and the players are going for it.(UPDATE: The album features a few different lineups, featuring members from Cleveland bands "x-blank-x, ugly beauty, my dad is dead, prisonshake, pufftube, numbskull, self destruct button," along with some guitar, bass, and drums contributed by none other than Weasel Walter... vinyl version coming out in December!)

SIC ALPS: US EZ LP (SILTBREEZE) Eeeeehhhhhh.... I mean I like it..... it's not bad.... but it just ain't Description of the Harbor.... or Pleasures and Treasures... or even Teenage Alps.... I've listened to this new full-length a good three times and it certainly sounds right, that dusted heavy 1960s garage pop mod Skip Spence-meets-early-Who sound that this duo has been working, plenty of vibe and aura and all that.... but I feel like they got the sound and then played around with it without really writing any songs, at least none that immediately laser-beam into my brain like "Semi-Streets" or "The Surgeon and the Slave"....

JOZEF VAN WISSEM: A Priori CD (INCUNABULUM) I can't believe this is a solo lute album... and it's good. Composed, not improvised, so no "funny" playing. It breathes, it's got space, contemplation, patience, timelessness (could be ancient, could be the future), the press-sheet comparison to Satie is right on... this is good music.