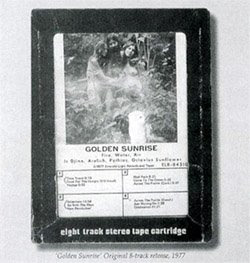 In 1977, a couple years after the passing of Father Yod from his earthly body in 1975, the core of his Yahowha 13 band (Djin on guitar, Sunflower on bass, Octavius on drums) convened as a band called Fire, Water, Air and recorded an 8-track only (!) release called Golden Sunrise. They were joined by the one and only Sky Saxon (aka Arlick) on vocals and Pythias on second guitar. This album was reissued as part of the God and Hair 13-disc box on Captain Trip, and other than the masterful Penetration album, it might be my favorite disc in the whole box. It took a while - at first I thought the music was pretty doofoid, and in fact I kinda still do, but this one hook, "Foo-ood, foo-ood, food for the hungry!," from the song "Food For The Hungry," just kept going through my head and I really started to appreciate the whole session as some sort of crazed R&B garage band playing ragged and spaced-out but tough-as-nails hard rock. The epic ambition and intense cosmic atmosphere of Ash Ra Tempel, but played with the far cruder chops and American greaser grit of Blue Cheer or Grand Funk. Look no further than "Wolf Pack," a feral 8-minute jam that really sprawls out and gets messy, with Sky pushing his vocals out there (pushing hard, maybe even, I don't know, pushing too hard....on me.....too haaaard) and driving the crazed stomping and roaming jam. "Howling at the city/Aaaaaaaooooo!/Wolf pack!/Wolf pack!" In fact, this track is so much like another sprawling and messy rant about cities, "Flowers Must Die" by Ash Ra Tempel, that it's almost uncanny. I doubt the Source Family heard that track and was directly inspired by it, but you never know... I mean, they were hip dudes and ladies, and they hung out with record-collecting world-travelling rock'n'roll people at their restaurant... Father was probably cool with krautrock imports being played on the communal hi-fi during "sharing time," right? 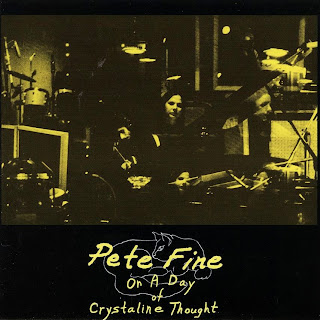 This Pete Fine album is nuts. Recorded in 1973, it's a wispy-voiced long-haired folk troubadour singing upbeat songs with huge, busy, dancing, cathedralic orchestrations. After one listen I found the overall sound fey-for-sure but also pretty amazing and wonderful... recommended to fans of Van Dyke Parks's Song Cycle, but more overtly hippie/mystic than that... I don't remember any one single tune, which is a little worrisome, but I am looking forward to listening to it again... 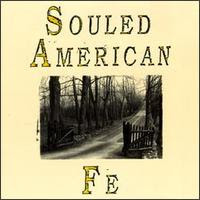 Aaaaaaaaaaahhhhhhhhhhhhhhhhhhhhhhhhhh Souled American. Their second album Flubber is starting to sound pretty essential in its own right - at first I thought it was kind of a place-holder between the head-turning debut Fe and the masterful third album Around the Horn. But Fe.... man I love this album, and it's the one I disliked the most at first. It is definitely their most upbeat album, which is a relative term, but this thing really does bounce and percolate and yelp along. You could mosh to it. (Three or four songs anyway.) But either way, the HOOKS on this thing.... I mean, the first song "Fe" starts with "I heard about your looooove..." and such a definitive Joe Adducci ballad bassline, and then goes into this epic pre-chorus with a new hook that digs deeper ("There's a certain kind of feeliiiing..."), with an even more definitive Adducci bassline, and instead of going to a chorus they just keep the pre-chorus going with what is almost a description of their entire music-making aesthetic ("Betweeen the notes... echoooooooes will loom.... back in tempo's time... locked in my room....") and then, finally, the chorus is comical bar-room sing-along stuff ("I knooooo-ow what the band fe's...") and it is indeed fun to sing along. That's just the first song, and then the second one "Field & Stream" starts with more wonderful bass guitar playing by Adducci, playing solo here, joined by vocals only for yet another superb hook that ends "write my name upon it, write my name upon it" and then the band comes in hard for a definite rocker. Seriously, SO MANY HOOKS, especially for the fourth-or-fifth-time listener: it's got "25 cent for the morphiiiiiiine, 15 cent for the beer," it's got "maaake me laugh, won't you make cry" with Chris Grigoroff just singing his guts out and an amazing verse structure ("There's a golden.....man of vision....on the TV..... where he comes from......doesn't matter......to the vote it pays/If you take this......to the highest source about you..... without question...... source says 'no vision, just plain old greed'") and a chorus bassline so slow and epicly head-banging that I can totally see why an 'art metal' label like tUMULt reissued this shit. It's got "maaaagic bullets," it's got the knock-down drag-out instrumental "True Swamp Too" (which almost comes off like some sort of hillbilly industrial metal, I'm serious).... man, what an album. Don't even get me started on Around the Horn, or the four other albums they've put out on top of that. 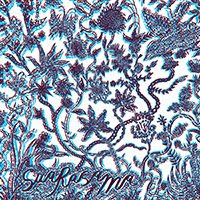 New from Drag City is the Suarasama CD, also released on double vinyl. Actually, it's a reissue of a 1997 album recorded in Indonesia by some ethnomusicologists. It's not a stunning album all the way through, but it really does sound nice and a few songs are excellent chilled-out and melancholy folk music, heavy on the oud. Reviewing this album for Dusted Magazine, Josie Clowney writes (along with some interesting cultural/historical stuff) "Suarasama didn't sound like a Drag City band when Fajar di Atas Awan was first released, but now they do," and yeah, with the female and male vocals and extended melancholy vibe, they really do remind me of Espers, though of course Suarasama predate them by a few years and there's no way either of them heard each other first. Also, I think Suarasama have just the slightest kosmiche/kraut-type glow to what they do, while Espers really don't (they have more of a British Isles cool, also a sweet sound).