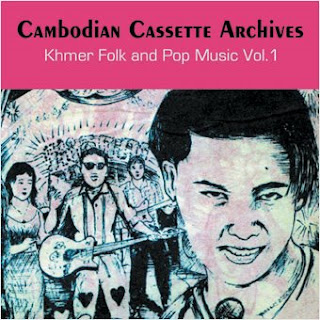 After listening to the Neung Phak CD recently I had to pull out the Cambodian Cassette Archives disc on Sublime Frequencies. It's sounding better than ever, lots of great songs and great thrilling playing, breathless fusion/folk/rock instrumental soloing that imbues every passage and buoys the heavy reverbed-out soul singing... seriously, I know it's impossible to keep up with every Sublime Frequencies release, so if you missed this one by all means go back for it! The Pig State Recon post made me a fall into a 1970s pub rock vortex for a minute, suddenly deep in the world of Rory Gallagher, Budgie, Sensational Alex Harvey Band, Ronnie Lane, and wild card Dr. Feelgood, all from the same year or two, they all kinda look alike, most of them aren't from the English scene but outliers like Ireland, Scotland, Wales.... I'm not gonna start collecting this stuff or anything but it is kinda diggable... Gallagher is pretty trad but also pretty raw... I love Budgie when they get heavy, never thought of 'em as pub rock but it makes sense... I don't really ever want to hear another version of Scott Walker's "Next" but SAHB do seem like a pretty heavy band... this Ronnie Lane clip was fine, kinda middle-of-the-road... and the Dr. Feelgood was kinda revelatory, more like Dr. Feelweird - what brought these guys on? At that point, just before I really got overwhelmed, the Pig State Recon guy snapped me out of the pubs and out of Great Britain altogether with the last two clips, some sweet sweet Curtis Mayfield and super scary 1970s Jerry Lee Lewis. Oh my god, the Killer - even when he was literally phoning it in for maudlin past-his-prime TV appearances with regional pickup bands, he was pretty much as terrifying as rock and roll gets. I didn't know Terry Riley and Don Cherry not only played together, at a 1975 concert in Koln, Germany, but that a very nice-sounding bootleg exists, and here it is making the blog rounds, sounding almost exactly how you would dream it to. Riley is in his moody and delicately churning late-night Persian Surgery Dervishes mode and Cherry plays glorious soaring and dancing trumpet over the top. On one track Karl Berger joins in on vibes and the way he syncs with Riley's machine music is awesome. This is great music and the track times (19:45, 8:13 and 12:16) would be perfect for an LP.... hmm....

Oh yeah, these too:

That Cherry/Riley bootleg gets a lot of spins around the house, even two years after I grabbed the bootleg off Dimeadozen. It's almost like the drone-jazz side of Fripp/Eno.

Glad to hear someone's enjoying those 70's Brit TV clips as much as I did. Thanks for the mention.

As for D. Cherry, all I know is: he's a jazz player, ain't he? That, and my Australian bro downunder at LEXICON DEVIL loves the guy. Search his blog for deep wordage about O'nette sidemen.