Damn, Dream Letter might be my favorite Buckley album. Recorded live one night in London, 1968, it features the exquisite electric guitar/vibraphone atmospheres of Happy/Sad in the service of songs that are as stretched-out and expansive as the stuff on Lorca and Starsailor but without the nightmare quality - these dreams are more eerie and mellow. Get Your Wings gets the proverbial "fuck yes" for the day, perfect album right now. I always loved Steven Tyler's lyrics, utterly gross even when they make no sense which is most of the time. "Get yourself a cooler/Lay yourself low/Coincidental moiter (murder)/With nuttin' to show"............. "You're the bait and you're the hook/Someone bound to take a look/I'm your man, child, lawwwd of the thiiiighhsssss"............ "Salt Lake City/salt lickin' biddies/bogus honey stinkin' uh gin/Well my daddy was hard/his face was pretty scarred/from kickin' ass and playin' poker to win".......... And Tyler's master stroke: "Sweet pandora/God-like aura/Smell like flora/Open up your door-a for me...just for me, yeah.... just for me, yeah.... just for mee-ee-yeah.... just for me, yeah... just for mee-ee-ee" - oh, excuse me, back to work..."Train Kept A Rollin" is just a steamroller and "Seasons of Wither" is majestic, and jeez, after Wings the iPod has gone right into Rocks and it's literally twice as good of an album. Believe it or not, they really only made three great albums, Wings, Rocks, and Toys in the Attic... (for 4th best I'm gonna go out on a limb and say Night in the Ruts...) There's no way I'm prepared to write about Rocks right now so I'll just pull out this unpublished shit I wrote almost a year ago: 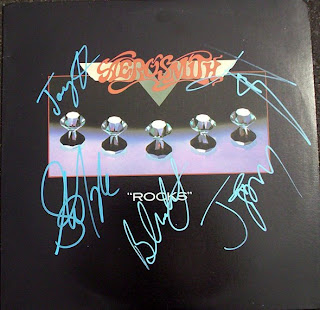 1. "Back in the Saddle." The slightly phased 12-string bass. The forlorn guitar bends matching the "baaaaaaack." The entire "riding hiiiiiiiiiggggghhhhh" outro, that's a great hook, with the guitar leads bouncing all around that monstrous bass/drums groove, Tyler’s ad-libs, and various dubby sound fx (whips, whinnies, wtf?).

2. "Last Child." Utterly forlorn "I’m leaving tonight/I’m leaving back home" non sequitir intro. The way the riff changes underneath the guitar solo, and the way the guitar solo blossoms into harmonized arpeggios for a couple seconds towards the end. Some of Tyler's most dizzying lyrics, with all that stuff about "J. Paul Get in his ear, with your face in a beer" or whatever it is.

3. "Rats in the Cellar." Ragged frenetic tempo, very punk, somehow with what sounds like actual street ambience coursing through it, though with no actual 'city' sfx except for a blazing harmonica solo that sounds like a car horn right when it starts. The way the punk chorus ("East side west side neeeeeeewz") blossoms suddenly and beautifully into "catch me if you caaaaan/cuz you’re weeeeeearing/tearing me apaaaaaaaart." Brief wtf space whoosh sound effect signals a ridiculous super-trashy high-speed raveup/outro with more crazy guitar interplay swirling around with the dubby distorted harmonica.

4. "Combination." The sludgy 'where’s the one?' aspect of the main riff. The constant Perry/Tyler twin lead vocal throughout. "I forgot my naaame" hook, especially when they sing "I got the new Marieeeeeeee." Also, "I found the secret/the key to it all" is a massive hook. This is possibly the best song on the album.

5. "Sick as a Dog." Possibly the second best song on the album, with perhaps the single greatest hook: "Pleeeeeeeeaaaase/I just GOT to talk to you." Also one of the greatest breakdowns in 1970s rock music, down to laid-back half-time guitar/drums and then launching back into the main tempo for a wondrous "taaake me baaaack" hookswirl outro w/handclaps. The song is all sweetness and the lyrics are all sickness, bittersweet hooks all the way.

7. "Get the Lead Out." Kind of a silly song, possibly the 9th best on the album. Still awesome. "Y'like good boogie/Like a real good woogie/You're a spring chicken/Let the beat start kickin'/Get outta bed, get outta bed, GET THE LEAD OUT!!!" I can't believe the way he sings "I'll show you my best/Take hold of my rest/We really can't miss" and makes the last line sound like "we'll really cay-mence," like a funny way to say "we'll really commence" which is a funny thing to say anyway. The song's dream-hook is that "Oooooooh nooooooooo/Ooooooooh no" business.

8. "Lick and a Promise." The absurd showpiece intro riff and how it tumbles into a full-swing boogie with a "Johnny-come-lately" yarn o'er the top. And of course the dream-hook is "Naaaaaa naaaaa naaaaa naaaaaa Naaaaaw," especially one of the last times with the arena rock crowd singing along, listen for 'em low in the mix. DUB.

And for another type of love song, I love the Dave E B-side where he tells us about that "state of emotional excitement in which a boy chases after a girl".... interesting followup to his more inchoate 1975 fever-dream "Girl" as heard on The Eyeball of Hell... Um, this Tent City stuff is awesome? Thumb piano and fuzz guitar is a great and under-utilized combination. Don Cherry comparisons are appropriate - could totally see him jamming with these guys. They're also capable of more driving rock styles without screwing things up... I liked these two singles on the X! Records label but I really don't remember 'em too well.... the Terrible Twos had a more 'synth-y' nervous quasi-goth sound, and Fontana were more straight-ahead driving rock... the cover of the Fontana one looks great, boldy proclaiming the band name and title sentiment in a great black-on-green stencil...
Posted by Larry at 9:49 AM

'Lick + A Promise' is my fave Aerosmith tune for sure, but it's sorta the only thing that brings me back to 'Rocks' again + again.

'Toys...' on the other hand will always stand up listen after listen with me. It seems every song on there has been a small obsession with me from time to time (except for the lame ass 'Big 10 inch') 'No More No More' was the first I remember. 'Uncle Salty' was another big one. Apparently that tune was some sorta 'theme song' for a bunch of stoners my brother went to HS with in '76. Hoo-rah!

Did I ever tell ya I went my 1st day of Kindergarten in a Aerosmith shirt? If only my mom kept the pictures..I'd be as cool as warm puke these days.

Oh yeah, "No More No More" is incredible! I wanna hear it right now and I don't even have a copy anymore, I just checked... guess I'll have to settle for "No Surpize" offa Night in the Ruts, it's got a similar feel in places... The Toys title track really gets under my skin too... it is too bad about "Big 10 Inch," it's like Dave Roth doing Crazy From The Heat ten years early.... I'm as cool as warmer puke, I didn't get my first Aerosmith shirt 'til I was 14, Done With Mirrors tour...