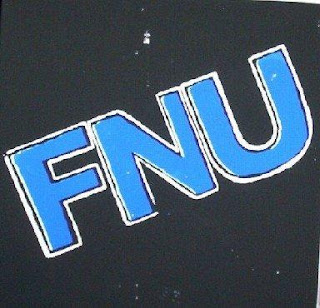 These mp3s are driving sci-fi punk weirdness and the cover design looks cool, that's it, I have to get a real copy of the FNU Ronnies record. This Warmer Milks POT Five thing is great too. C30, two 15-minute cuts, frayed-B&W-xerox-of-crude-psych-1960s-ESP-Disk-looking artwork on the J-card, the tape itself covered in industrial tape and magik marker, put it in and it sounds about 10 times too quiet, turn it way up and somewhere under the stereo hum a lovely guitar arpeggio is unwinding through darkening clouds while twigs snap and lightning flickers in the sky. There's thunder far away but the twig snaps are louder, and somewhere in the middle distance Mr. Turner is singing a song, a boldy melodic paranoid number done sweetly, another ghost aria for the 2000s. After a few minutes it winds into improvised instrumental noise terrain and winds out that way a few minutes later. Side B is another example of Milks-play-plinky, some might say half-assing it, or is Turner doing the unthinkable, hacking out actual new vocabulary in the field of contemporary improv music? Much like paleontologists are still sometimes discovering completely new species... anyway the 'songish side-long freakout' b/w 'subdued plinky improv side-long zoneout' is the same record structure as his recent-ish Let Your Friends In release. In This Room (cassette release on Fuck It Tapes) has a different structure, which is Mr. T sitting and singing songs with acoustic guitar, relatively normal songs (although much weirder than the Cassette Gods review would have you believe), 11 songs in all, 5 on one side and 6 on the other. I liked it right away, even while thinking that it was longer on atmosphere than songwriting, but after a second listen I think the songwriting is pretty good too and there are some gems on here (besides the cover of Jackson C. Frank). He doesn't exactly SELL the songs or anything, it is fair enough to call this "mumble-folk," but these are real songs. I mean shit, remember "Penetration Initials"? That was like 15 real songs, all by itself. The Climax Golden Twins album is epic - the sides seem extra-full, a good 25 minutes or so, as seems to often be the case with Abduction Records (and/or Sun City Girls records - remember "Where Eyes Fly Low," Side C of Planet Boomerang, what was that, 32 minutes long??)... good thing they're using that 180 gram vinyl! It's a baffler too, I've listened to this thing twice and it seems to cover a whole lot of territory while at the same time covering its own tracks as it goes.... if I remember right the first half has the more confounding/collage type stuff, while for the second half they get down to shredding guitar-based rock trio business, covering improvisational and instrumental ground much like the SCG and doing it unabashedly, with a similar level of brio and panache...
Posted by Larry at 6:00 AM

jim veil said...
This comment has been removed by the author.
4:17 PM

Thanks, already got the 7" from bistrodistro.com (see future post) - got any new compositions coming out?