Ska Bonanza came up on the shuffle and sounded so luxurious that I was moved to tweet something about how third wave ska, especially during its 1990s heyday, got so terrible that I'm only just now, 20 years later, able to appreciate what a great band The Skatalites were. One of the great R&B bands period, especially if R&B is an creation of the entire African diaspora, and not just something that happened in the mid-20th Century United States. Here's a couple Skatalites burners featuring Don Drummond:

I also already tweeted about how heavy the Herb Dub-Collie Dub album is, released more or less anonymously in 1976, in the killer sleeve below. No artist or band credit, just "Mixed by King Tubbys" [sic] on the label. As far as I can tell, when the album was reissued in 2001 (in a much worse sleeve) it was billed as by King Tubby & the Skatalites, I guess in that the Tubster was remixing Skatalites rhythms, which is weird, because, uh, the rhythms on this album are not ska rhythms at all, right? They are slow roots rhythms? Unless I'm crazy, or Tubby slowed the tape down to like less than half speed, which isn't true... 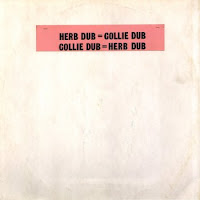