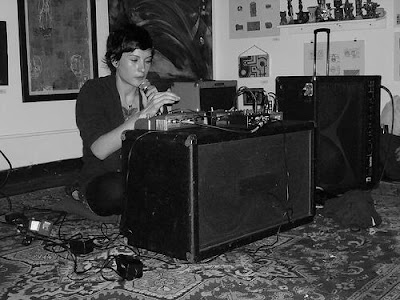 It's nice to have the Inca Ore record first up there, because when I list what I'm listening to on a day or a weekend like this, I'm always amazed by how rarely anything new or remotely current gets played, and since I list things in the order I listen to them it's even more rare for a recent record to be listed first, which is the only way its name will show up on my twitter and make it look like it's actually about new music, like a real music writer's twitter would be. Sure, I like plenty of new music, and I keep up pretty well, but whether it's iTunes album shuffle or LPs stacked by my stereo, it just tends to be older stuff. I guess I hold the controversial opinion that anything recorded in the 1960s on up can still be interpreted as technologically and culturally new. Even if we just started at a year like 1964 and worked towards the present, we'd be mining old music recordings and coming up with beautiful new (to someone) gems for as long as we have electricity and speakers. Strewn throughout the last five decades were vast deposits of musical gold that seem to be even more abundant than crude oil, and unlike oil, recordings of good music are extremely reusable.

Even the Inca Ore record was released two years ago in 2009, so this is hardly a timely mention I'm giving it, but it does seem to be her most recent, which makes it still current, right? Also, I listened to it twice just now, and I'm still not sure what to say about it. Maybe this record needs to be 40 years old before I can begin to grasp it. I really liked her Birthday of Bless You release (2008, also Not Not Fun), and her side of the split LP with Grouper (originally a cassette from 2007). Both of those seemed really focused, clearly stated, and legitimately spooky, and though Silver Sea Surfer School seems ambitious in new ways, which is a good thing, it also seems more stylistically jumpy and unsettled. So yeah, not sure, but I'll keep it on my iTunes for future shuffles to turn up. (Side note: the Discogs page for this record lists style as "Abstract, Noise, Poetry, Therapy." That's the first time I've seen therapy listed as a style... that could be listed for a lot of records, right? Discogs apparently already has it listed for 639. Blood on the Tracks isn't one of them.)

The YouTube channel that hosts the above Sound Dimension "Heavy Rock extended with Heavy Dub" clip is great and I've listened to a bunch of stuff on it this weekend. Great sound, pics of the original labels, lots of seamless mixes between A side tunes and B side versions, and a selection that looks to be entirely pre-digital. For just one great example, check out this mix of Sugar Minott's "I Need A Roof" with the Studio One "Consumer Dub." Thanks PabloWKingStoned!

Raise your hand if, back in the 90s, your copy of the Porter Ricks CD cracked a month after you got it because of that otherwise rad metal tin it came in! Now raise your hand if you forgive Chain Reaction anyway because the album is so awesome! 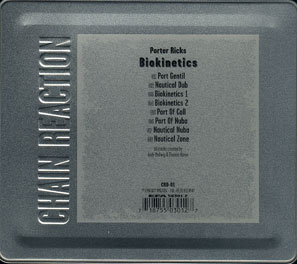 Two of the heaviest stylists in reggae history unite on the ephocal In the House of Vocal and Dub, Prince Far I the "voice of thunder," and you know what Tubby does (mix of thunder). Checked out the Michigan & Smiley album because in Check the Technique, KRS-One talks about how their song "Dangerous Diseases," big in New York at the time, was an influence on Boogie Down Productions, as was reggae in general. I do love "Dangerous Diseases" aka "Diseases," cut over one of my favorite dancehall-era rhythms which is indeed known as the "Diseases" rhythm (or sometimes as the "Golden Hen" rhythm, though I'm not sure why yet), and can be heard on a bunch of tracks like another fave of mine "Dance in a Montreal" by Brigadier Jerry. "Diseases" is a funny song too ("I said the most dangerous diseases/I said the most dangerous diseases/I'm talkin' like the elephantitis/The poliomyelitis"). That said, though I do dig a lot of digital '80s dancehall tunes, especially up to like '82 or so, and will surely continue to find more, these days I'm completely happy to spend most of my time listening to reggae recorded before the 1980s digital boom. As mentioned above, the well will never run dry (despite what Prince Alla might advise). (UPDATE: I knew the "Diseases" rhythm didn't start with "Dangerous Diseases," I just knew it!)

I don't really have an original edition-of-75 copy of the Organum & New Blockaders cassette on the Frux label as listed above, I just downloaded it off of a blog. It was recorded in 1984 and it's definitely killer stuff, grinding low-end synth, intangible electronics, clattering concussion/percussion, sounds of large objects being torn apart, perhaps more, perhaps even less... When it first came up on the shuffle I thought it might have been ... that group actually had a dark industrial vibe at first (circa 1992-1994 or so?), gradually replaced by a somewhat lighter extendo-groove kind of thing, and then fragmenting and reassembling from there. They are still going and I still like their music. I now wonder if the New Blockaders were a direct influence on those initial NNCK jams....doesn't matter of course, but I did just manage to write more about NNCK here than I did about the New Blockaders..... 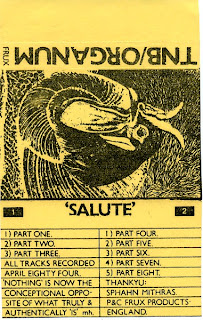 Love these cheap Lee Perry LPs that are out there, I got Return of the Super Ape for $8.99 at Laurie's Planet of Sound this weekend, possibly Chicago's best non-Reckless record store. And if you really want some nice price reggae vinyl, hit up Ernie B!

Relistened to all three aforementioned Inca Ore records just now. The first two are indeed excellent, and while I still agree with what I wrote at the beginning of this post, I'm starting to get a handle on the third one. There's a tune called "Shine On from the Heaven Above" that really hits a yearning spaced-out spot...
Posted by Larry at 11:05 AM

Liz is going to be re-issuing the Grouper/Inca Ore on vinyl. It may already be out.

i think "silver sea surfer school" is going to be the last inca ore record? eva mentioned that she was pretty much retiring from music besides "we like cats" when i asked to put out a tape a year ago.

Yeah, I grabbed that reissue when it came out and copies still seem affordable. I was wondering if Inca Ore had retired. I could see her music being a pretty intense thing to keep up. What is "We Like Cats"?

"we like cats" is a "dub" band with the guy from white rainbow and the lady from valet where they pretty much sing about how they like cats. some people like it but i think it has that "community over quality" vibe that's kind of common here in the pacific northwest. they have an album on marriage records and play portland about once a year.


Raise your hand if, back in the 90s, your copy of the Porter Ricks CD cracked a month after you got it because of that otherwise rad metal tin it came in! Now raise your hand if you forgive Chain Reaction anyway because the album is so awesome!

Too fucking funny, Lar. I've got a box full of those "rad" tins. That's why Germany lost the war.