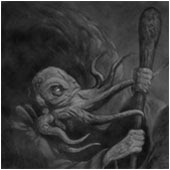 
Good morning Cthulu, chilling with staff on the cover of this new Robedoor CD....and how's the music today? Robedoor, as mentioned just a couple posts earlier, has always done just fine maintaining their established level of aesthetic success, but are their any next levels in their future? In other words, are they gonna pull a Mouthus on us? (cf. Saw a Halo on Load Records.) Weeelll, so far so promising on the first track, we've got the same deep deep drone murk as always but now with a perceptibly new 'windy/stormy' vibe that is definitely Lovecraftian enough. And the bar stays high throughout, with more new territory explored via industrial percussion and subtle low-end keyboard grind.... the last track "Wendigo Psychosis" is a good 'un. (Waitaminnit, what the fuck was that title??).... coworker grew up in Gainesville, FL and he brought in some old mixtapes he made off the radio -- that Hi-C song is hilarious and slammin', I don't remember that one at all -- "Move This" was always my favorite Technotronic song with its odd melancholy wistful feel, great deadpan performance by Ya Kid K -- who the hell is B.G. the Prince of Rap?? Terrible song, dare I say a Snap "Power" ripoff?.... Genesis "Jesus He Knows Me", jesus, this is a terrible song too. I've never heard it before. I can non-ironically appreciate some Phil Collins & 1980s Genesis as much as Panda Bear or anyone else, but FUCK THIS SONG.... "Wild Thing" on the other hand is one of the greatest songs in the history of pop radio. Love the dusted Schooly D feel.... any Led Zeppelin=workplace classic. Totally gross guitar solo on "Fool in the Rain." Played Rhythm & Sound after that and it sounded so good I played half of it again all the way home on the train. It's not only some of the most gorgeous minimal techno this side of Gas, a lot of also works as actual reggae music. Unlike say Pole, who merely organizes sound, sometimes according to dub reggae principles, Rhythm & Sound play music, sometimes dub reggae. At home put on the Time-Life Treasury for the kids. I had been singing my dead-on-as-possible version of "Jingle Bell Rock" all evening during our winter-time cabin-fever-style rough-housing and improvised gymnastics sessions, and they wanted to hear the real thing by Bobby Helms. Other highlights: the definitive "Holly Jolly Christmas" by Burl Ives and "Feliz Navidad" by Jose Feliciano, the classic cowboy version of "Frosty the Snowman" by Gene Autry, and Bing Crosby's utterly heartbreaking "I'll Be Home For Christmas," I think it's an anti-WWII protest song. After that and also cool with the kids was the Italian prog/folk/psych thing on Last Visible Dog. (Gianluca Becuzzi & Fabio Orsi. I'll never remember these guys' names.) I'm really starting to like that album, and it definitely gets the Popol Vuh award for this month. Really haunted and lonely folk-psych textures, with a slightly harsh drone edge running underneath.... that Social Junk disc ("Dirty Cloud") got its second or third play, and it's a winner too. The disc runs a little long, but for a noise band I'm impressed with how insistent and focused their rhythms are. Excellent fractured vocal work over the top. Lots of surprising atypical sounds. Turns out they're from Ashland, Kentucky, which is cool too. (Not a big town. I think the Judds were from there.) I would like to hear more of their stuff... and another spin for the sick new Milks CD, that might be it for the night.... (oops, one more bonus spin for the Becuzzi & Orsi, after Angelina came home and wanted to keep it mellow)
Posted by Larry at 5:48 AM