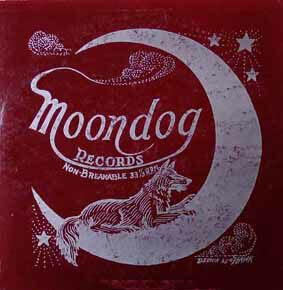 Such a heavy record by Rhythm & Sound, maybe in my top 10 from the last 10 years.... Moondog record was brought over by some guests, new vinyl repro of one of his earliest self-released records, from 1956, with a great hand-crescent moon design on the cover. Only the second time I've been hanging out while a Moondog record was playing, and the first time was good, and this time was even better, space-age 1950s-vintage acoustic chamber music that achieves otherworldly status by embracing strains of music from all over this world. The back cover liner notes list the time signature for each song, and we had out the pen and paper trying to figure out how to count things like 1/4 time and 5/2 time.... played the Mouthus record for guests as an example of a great new noise-rock release... one was wondering about Keiji Haino so I played the second double-live Fushitsusha CD... "This album is ridiculous" was all I could manage for an introduction, though awesome is a more correct word because love it or hate it, this music inspires more awe than it does ridicule. Guest called it "future primitive," which I could see, some tribal speaking-in-tongues ritual from the Stone Age going on in front of a short-circuting electric cable that is bigger than a house. In a thunderstorm. Haino's vocals were so intense I had to turn it off before too long. It's not a party record. For all the volume, it's his constant use of silence that is really terrifying.
Posted by Larry at 9:54 PM