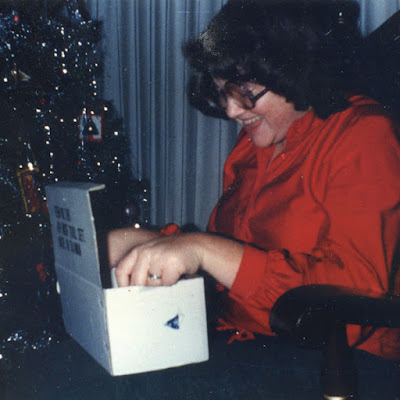 There is a back story here, but this review is a more immediate reaction. I already listen to any new Ma Turner (aka Mazozma) record with a certain heightened sense of anticipation, because he really does almost always make strange, challenging, unexpected music, but this new record Heavy Death Head on Feeding Tube has really got my head spinning along with the turntable as I nervously try to crack the code, finally getting somewhere on listens five through seven. For starters, I figured out how to read the insert, which is in fact a track listing, with tiny hand-written credits, and a little pictographic drawing for each song, and now I'm actually paying attention to when each track ends and begins (it's easy to lose track, pun intended), what they're titled and what their lyrics might be, and how tenuous, even with lyrics, their relationship to what we usually think of as songs sometimes gets. Although of course the very first track "Circle (Laa)" is a song, it's a full-on spiritual chant, and it does have words, even besides the chanted (sub)title refrain "laa." Indeed, the tracks that do have lyrics are more or less all chant songs, or vocal trance songs, which is like a very weird spin on Alice Coltrane's 1980s ashram tapes that Luaka Bop just released a 2LP sampler of. but of course coming from different dark levels, yes in the tradition that might start with Madcap Laughs and Oar and runs through Ready For The House and beyond. The second track is called "The Dawn of Time," but it's also the closest thing to a title track, because after a melancholy/pretty passage of sweet organ chords and forlorn drumming, Mazozma chants "oh I must admit/oh I must confess/I've been riding high/on the heavy death." Two equally unsettling instrumentals follow, tortured and obtuse textures and tones, with more of the same on side two opener "Hor-Flora," the entire song's verbal content a single question asked once ("What are the odds of anything evening out?"), and that paranoid/analytic line giving way to maelstroms of guitar, saxophone, and non-verbal voice. It is in fact a comfort that Mazozma is a quartet on this track, as three other pseudonymous people are vocalizing and jamming away with him; at least he's not going through this darkness alone. He's not alone on "Show Yourself" either, which is the most melodic song on here, but still heavy death-(head)-folk, Mazozma singing the forlorn words ("deeper into glass/it's all just sand/pieces alone") along with the mono-named Stella, who also sings very powerfully with Mazozma on the aforementioned opening track. The closing number, "All In Three (Laa)," has the same subtitle as the opener, but no lyrics, subtitular or otherwise, and no singing. Instead it's another Mazozma solo instrumental work, this time conjuring up a mass of tripped-out high-pulsation free-form electric guitar string music to ride the heavy death headtrip over and out.

NON-EXCLUSIVE NEW VIDEO NON-PREMIERE!
Here's a video Mazozma made for "Backwards Salutation Into Waking" from the Heavy Death Head LP, one of the creeping obtuse instrumentals on side one that help bridge the first half of the album from nothing to nowhere, here set to a strange silent film with a humorous on-location contempo-psychotronic feeling. The way sound develops along with image reminds me of, no shit, Teiji Ito's score for Maya Deren's Meshes of the Afternoon (though the deadpan visual content itself is a little more along the lines of something like Ron Rice's Flower Thief).