The trio known as Good Willsmith has been tearing it up in Chicago for awhile now, to popular acclaim; I've missed out on them entirely other than listening to a couple different 20-minute tracks on Bandcamp which kinda overwhelmed me as dense stews of free-formless electronic future noise. But since then I've heard two members of the trio perform solo, and both times they seem to find beauty and tranquility as if in the eye of the Good Willsmith hurricane. First I saw member Muxqs aka Max Allison play a haunting, lush, eerie solo set a few months ago (word is that his LP that just came out on Midwich is the same material he was playing live, which means #mustgrip, and not just because of the cover art*), and now I'm repeatedly spinning this debut LP by TALsounds, the solo act of member Natalie Chami. She works alone and in real time, looping synths and singing vocals, creating instant compositions that really hit a sweet spot where dreampop, shoegaze, slow jam R&B**, classical string quartets, vaporwave (yes, vaporwave), and vintage synth mantra all hang out. Oh yeah, noise too -- the leadoff single from the LP "Disgrace" has a particularly grinding/strobing synth through-line, and a drumbeat that kinda lurches like a Wolf Eyes groove. 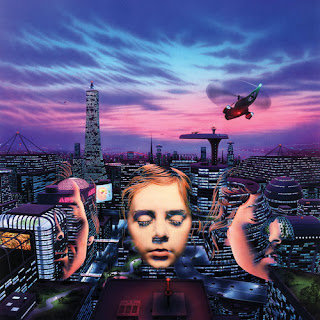 * #Gripped the Mukqs today, and man, this record is crazy... it does seem to be the same material that was played live, but the recording presents it as brighter and clearer, where in a live setting (or maybe just my memory) it was a little hazier and fuzzier. Everything coming through so clearly has a real relentless brain-scrambling effect, in which complexities emerge and then pile on top of each other in wild permutations, flocking in and out of phase like clusters of cybernetic birds. The first note I took during side one was "an all-robot Steve Reich ensemble going in and out of phase patterns while making an Arthur Russell disco record" but I think it's beyond that already....

** Not too far from say Atlantic recording artist Ravyn Lenae, minus the hip-hop drum programming... and Lenae is a former student of Chami's, as reported in this brand new Chicago Reader feature on TALSounds by Peter Margasak that got me listening to Love Sick in the first place. Hat tips all around!

POSTSCRIPT:
More TALSounds highlights include this video of her performing a song "Hair" at home, a nice look at her process (and bookshelves), and a great cassette release from 2013 called Sky Face, similar to Love Sick but a bit more raw and even dreamier. Dig in!
Posted by Larry at 12:32 PM