THIS WEEK IN CLASSIC ROCK #397 by Larry "Fuzz-O" Dolman


Please don't watch this whole tawdry cheap-TV production (a 1986 episode of A Current Affair* that interviews semi-estranged members of music superstar Prince's family), but jumping to the section in which Prince's father John Nelson talks to a reporter while sitting and playing piano is a fairly fascinating musicological exercise. (It starts at the 6:02 mark, and I beg you, please click here to correctly skip all the other stuff, or immediately jump to the 6:02 mark in the embed above.) Mr. Nelson really does seem like a true artist, like his son, albeit a non-commercial one (advanced soul and jazz harmonies, yes, but he sure as hell never settles on a hook). The program tawdrily implies that he wrote "Purple Rain," just because he can tinkle the ivories while singing a bluesy version of the chorus. He probably did once sing a couplet like "never meant to cause you any sorrow/never meant to cause you any pain" to a young listening Prince, and not gone anywhere with it. Nonetheless, I would give significant credit to his playing and singing, however rambling, for directly influencing his son's legendary style, which was a hybrid of two things: Papa John's soul/jazz/jive/entertainer sensibility and the killer 1970s AM and FM radio of Minneapolis/St. Paul pumping out hook-laden hard-rock, R&B, funk, and pop. When this little Prince filtered the former through the latter it shocked the world. And, if the stuff about the Kid sneaking out and watching his Dad play backup music at a strip joint down the street is true -- and I kinda think it is -- well, that explains a whole lot too.

* I'm not joking about this Current Affair shit. DO NOT watch that poison. You see, A Current Affair was produced from 1986 to 1995 by the film company 20th Century Fox. In October 1996 a subsidiary of this same company called the Fox Entertainment Group launched a 24-hour TV channel that soon became well known as Fox News, and is still going all too strong. Current Affair was essentially a trial run,

Video Soul interview with Prince's onstage dancer/hypewoman Cat Glover and dancer/hypeman/bodyguard Gregory Brooks, both of whom performed with Prince and his band from 1986 to 1989, very notably in the Sign of the Times concert film and on the Lovesexy Tour (which I was lucky enough to view in person on their Ames, Iowa stop of November 21, 1988). Cat is so bad-ass and sweet in this video, not surprised she's from Chicago. Esmond Elementary and Morgan Park High represent! (The interviewer Donnie Simpson is kinda terrible tho, even if he is from Detroit, like Brooks, who seems like a cool dude.) 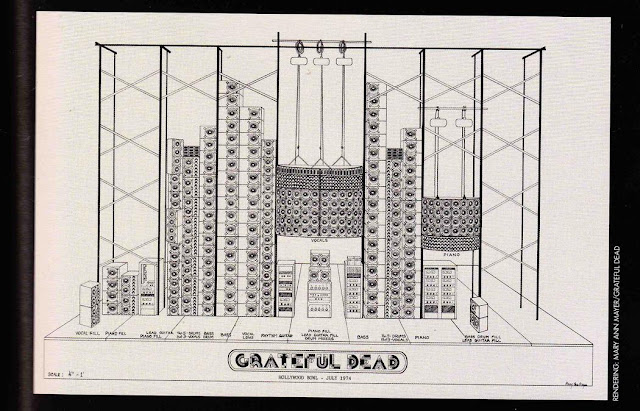 Vice's celebrated and maligned disruptive journalism style keeps getting more cloying every time I try to read one of their pieces, but they did publish what might be the definitive article on the Grateful Dead's Wall of Sound (via their music/electronics/culture/lifestyle subsidiary Motherboard).


As a Joni completist (still haven't gotten to the 80s) of course I'm digging her muezzin chorale reinvention of The Youngbloods' "Get Together" (perhaps more in the spirit of its writer Chet Powers aka Dino Valenti than its most well-known interpreter Jesse Colin Young) as backed up by that obscure group Crosby, Stills, Nash & Sebastian, live at the 1969 festival that was documented by the concert film Celebration at Big Sur, and at which Stills notoriously got into a scuffle over the ostentatious fur coat he was wearing with a less sartorially concerned audience member. "Get Together" presumably happened later in the day, as Stills is sans coat, and also sans a front tooth, which I hope he didn't lose in the fur coat scuffle. Must be a feisty guy, and he's certainly feisty on guitar here right out of the gate, and Joni has to gently make eye contact with him and smile so that he gets just self-conscious enough to stop showboating, because, like... she's trying to sing the first verse of the song. Pretty sure she cuts his first solo off too, but after that he knows his place. His guitar playing is killer throughout, don't get me wrong, and Joni knew just how to arrange it.


Digging on M. Davis's "All Blues" lately, reading how it directly inspired songs like "Dreams" by the Allmans (subtle) to "Strange Feeling" by Tim Buckley (obvious), and just heard this 2009 reinterpretation (embedded above) by the duo of Gary Peacock (bass) and Marc Copland (piano) on the WNUR jazz show.


Time spent on earth by me knowing the song "Joy and Pain" by Rob Base & DJ E-Z Rock before actually hearing the original existential slow-jam sweet-simmer summertime masterpiece by Frankie Beverly & Maze that it got its hook from: 28 years.


Speaking of smooth ass raw soul how about those demos that came with the 2000 Rhino Records CD reissue of the 1970 LP Curtis? "Little Child Running Wild" has that killer main riff, and on the demo version here, called "Ghetto Child," the verses and choruses aren't tightened up yet, which allows the band to experience the riff and zone out on some ragged and raw grooving. I assume that's the one and only Craig McMullen with the exquisite/ruffneck wah-wah guitar soloing, but his name doesn't appear in the musician credits, which this CD reissue presents in one big list at the end, with no reference to track titles or instruments.


And why didn't I know that Lauryn Hill was on some Terry Callier shit, here as recently as 2013??


The Blue Nile are classic rock! Because even though at one time their 1980s music was nouveau and current, that time is now 30 years ago and can be viewed through a historical, and even classical lens. Sometimes I think of all those New Romantics like ABC, Spandau Ballet, even Duran Duran themselves, as a subset of classic rock. But man, The Blue Nile were good, because they were also smooth ass raw soul, even though a bunch of white Scottish dudes. And, lead singer Paul Buchanan might just be the source of Richard Youngs' croon when he gets electro-pop (see Behind the Valley of the Ultrahits for best example), nice nick there, Rich...


Been listening to almost every different version of "These Days" that's on the 'Tube, gotta be at least 20 already, mostly different performances by an inner circle of interpreters over the years (although I did bravely listen to a version by Drake, and I don't mean Nick, and I even kinda like Drake sometimes, but this version was so bad I'm not even gonna link it). Jackson Browne wrote the song when he was 16, but it didn't get released until Nico did a version a couple years later, on which Browne played guitar. Various others did a version at the time, like a rather overproduced Nitty Gritty Dirt Band, but in 1973 Gregg Allman, in my opinion, recorded the best (cosmic country) version there will ever be. It was on his first solo LP Laid Back, and it remained a soulfully heartbreaking song in his repertoire throughout the years, even as recently as 2012 in front of a buncha talkative twits in NYC. Back in '73, Browne apparently heard Allman's arrangement and recorded his first official version in Gregg's style, and it's nearly as goddamn good. (The liner notes say "The Arrangement was inspired by Gregg Allman," even though Gregg's album came out a month after Jackson's. Studio brats!)  As for other arrangements, I might just give 2nd best to this much more recent one by St. Vincent aka Annie Clark performing solo on electric guitar and singing those lyrics like goddamn Vashti Bunyan herself. REALLY good. But Jackson Browne himself playing the song solo back in 2008 at a festival in Claremont, CA is right up there. Hearing him perform a (then-new?) hypnotic fingerpicking arrangement, with careful but still plenty soulful vocal delivery, is like the unveiling of a statue that the sculptor has carefully chipped away at for 40 years (44 in this particular case). And speaking of careful, the always strong final line ("Don't confront me with my failures/I had not forgotten them") certainly takes on new light after his denial of the allegations that he beat up Daryl Hannah in 1992. Many people say it's a great line, but I really don't like the way it leads with "don't confront me"; it could read as "Don't point out how awful I can be, when I'd rather you stayed quiet about it." Also, by ending the whole song, rather than an earlier verse, with this line, it hangs in the air like a command, rather than an immediate emotional reaction that can be elucidated and perhaps resolved by further discussion. At least Allman led with "Please don't" instead (he did often refer to himself as a polite Southern boy), and then, regarding his "failures," changed Browne's "I had not forgotten them" to "I'm aware of them," which isn't necessarily more polite, but is at least a little more self-effacing.


Count Ossie is classic rock! My friend thinks they're quoting an American song with "Four Hundred Years (Instrumental)" from the Grounation 3LP, and it sounds very familiar to me as well, but neither of us can place it. Anyone know if it's a direct quote? And if so, what song are they quoting? Leave a comment if you know.