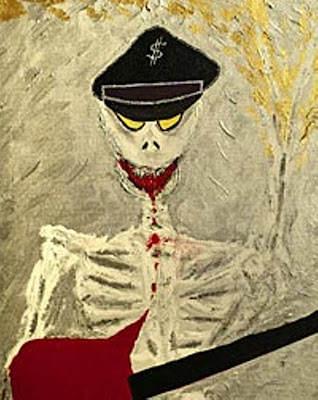 I walk past a Blastitude HQ bookshelf. I see on shelving unit #4B the spines of 20 or so Juxtapoz magazines. I had an enjoyable subscription for a good four years in the very early 2000s. I decide to pull one of the issues off the shelf at random and thumb through it for eyeball kicks. I pick the "SPECIAL 50th ISSUE" from May 2004 and none other than Iggy Pop is on the cover. (Iggy's been on my mind lately, because he's always on my mind, but especially lately, partly because of the Jarmusch doc, but mostly because his Post Pop Depression album is so damn good. Like, it's not gonna be as historic as The Idiot, but I honestly think it might be even better.) The cover line is "Betcha Didn't Know Iggy Paints," which is kind of the whole Juxtapoz vibe in a nutshell. But that's what I loved about it, that nexus between visual art and rock music, and they published lots of great art in their magazine, most of it not by rock musicians. Iggy's paintings are cool, but I think I like Ron Asheton's crude deathrock imagery even better. Yep, he's in here too! And there's a Q&A with him that has some interesting stuff, like the fact that his artwork has been purchased by..... Renee Zellweger. But I'll just quote this part where he describes a teeny little slice of late 60s life at Stooge Manor:

"I was doing other artwork for The Stooges. We had what was called The Wall, which we'd cover with any kind of weird article or drawing or altered magazine cover. Iggy's annulment papers from his wedding were up there. There were pictures from pop magazines of things we hated, like the Partridge Family. We'd put up foldouts of those people and throw darts at them."

Would love some photographic evidence of The Wall, but I'm sure it's buried deep in the Southeast Michigan dirt along with the 8-track reel-to-reel "early rehearsal and performance" tapes of the Psychedelic Stooges.

P.S. Ended up on this "tour of historic Stooges sites" article from 2011 & had fun StreetViewing a lot of these addresses. Insane to think of Stooges rehearsals blasting all the residents of that tiny block where 1324 Forest Court is.... 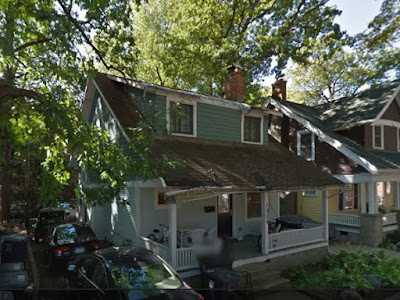 ALSO READING:
Just finished DHALGREN by Samuel Delany! Blew my mind. Excited to hit Heavenly Breakfast and Driftglass next.... also on the sci-fi front: WORLDS OF JACK VANCE (short stories by Jack Vance including his masterful "The Moon Moth") and STORIES OF YOUR LIFE AND OTHERS by Ted Chiang (after watching the Arrival movie, which was great but the story its based on here is even better)... HACK by Dmitry Samarov (What if Bukowski was a somewhat nicer guy with better habits who drove a cab in present-day Chicago and wrote all about it with maximum pith?).... MICROGROOVE by John Corbett (Great-so-far long-awaited follow-up to his classic Extended Play book).... speaking of Iggy, DETROIT ROCK CITY by Michigan hardcore legend turned true crime journalist Steve Miller is a great oral history that starts in the 60s with the MC5 and Stooges of course, but includes Seger, the Nuge, and the Romantics, lots of stuff on John Brannon, and even works in Couch, Wolf Eyes and Andrew WK as it heads all the way up through the White Stripes... BLACK PANTHER: A NATION UNDER OUR FEET by Ta-Nehisi Coates & Brian Stelfreeze.... I AM BRIAN WILSON by Brian Wilson also on deck....
Posted by Larry at 9:45 AM

Gonna have to name my speed-metal band Maximum Pith. Thanks for reading!