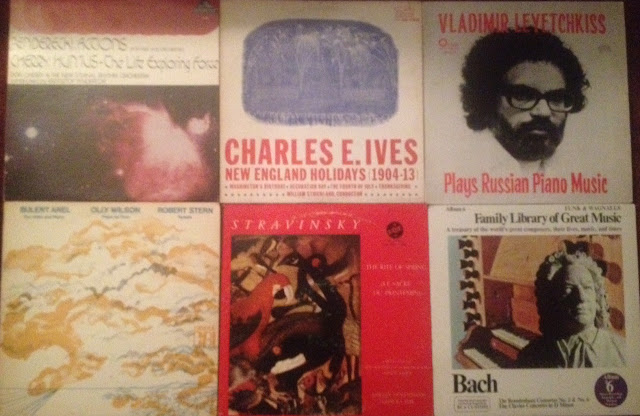 Tonight I went to my beloved local branch library to return a book, and what should be sitting there on the free table but about 30 records. They were all classical, and there was some actual good stuff in there! I mean get this, the 2nd record in the whole pile was that Krzysztof Penderecki/Don Cherry LP I've heard about for years, and this thing is a MONSTER. It's got Don Cherry with the New Eternal Rhythm Orchestra, which includes no less than Peter Brotzmann, Willem Breuker, Gunter Hampel, Fred Van Hove, Terje fuckin' Rypdal, Han Bennink, Paul "Gentle Harm of the Bourgeoisie" Rutherford, and a bunch of other maniacs. Side one is a stunning #sidelongjammer by Cherry called "Humus - The Life Exploring Force." Turns out to be recorded live, and starts with a kind of live chant piece for three vocalists with his wife Mocqui Cherry on tambura, and then the full band just goes off. Rypdal on here, man, it's no coincidence that the first syllable of his last name is pronounced "rip" because that's what he does on his guitar solo. Side two is a composition by Penderecki, "Actions (For Free Jazz Orchestra)," on which he conducts Cherry and Company. Both sides were recorded live one night at a German festival in October 1971. This copy is a 1980 reissue of the original 1971 gatefold release... the 1980 cover design is actually cooler.

There was also a sweet Charles Ives record in there, New England Holidays (1903-1914). Ives is just the best. He's just so off, both musically and biographically. An insurance salesman who writes pieces for New England holidays, and just calls them by the name of the holiday itself. And then the compositions themselves are like greeting card music played by a veteran marching band that has noise sections sprinkled throughout. Another monster, this one.

And of course I'm gonna grab any free record that looks like the Vladimir Leyetchkiss Plays Russian Piano Music LP (top right corner).  Unsurprisingly this thing is fantastic. Mr. Leyetchkiss plays music by no less than two Sergeis, Taneyev and Prokofiev, and then 12 etudes by an Alexander (Scriabin). I think these last are especially beautiful, like several miniature Koln Concerts!

In that same spirit of cover art with potential, this weird Bulent Arel/Olly Wilson/Robert Stern record looked like a must-grab. And hell yeah, it's got some vibes. It starts with a composition by Bulent Arel, self-explanatorily called "For Violin and Piano." The two instrumental voices exhibit masterful spiked plink-plonk duck-and-hide accretion for half of side one. The other half is taken up by Olly Wilson's "Piece for Four," the four being flute, trumpet, piano, and bass, assaying their own similar accretion-field built by breathe-and-wait hunt-and-dive long-tone-then-scatter delineations. Side two is taken up by a single #sidelongjammer called "Terezin" by composer Robert Stern (I'm not familiar with any of these guys). This is a textbook example of the 20th-century horror-of-war operetta, here for one soprano voice, cello, and piano (played by Stern himself). Dorothy Ornest is the vocalist, and the style is classical 20th Century stern operatic, capital-a Avant-Garde, but she never overwhelms, sitting out for long periods while Stern and cellist Joel Krosnick just kill it. Stern's composing and piano playing has a somewhat Feldmanesque sense of space, except he's more spiky... when he jumps back in from a long silence, he's likely to draw blood, with Krosnick sawing away in the spaces. Over these settings, Ornest intermittently appears like a sad angel, voicing the libretto which is made up of poems written by children in Nazi concentration camps. Like I said, heavy music. Anyway, this is a great record. It's on CRI - Composer's Recordings Inc. Don't tell me that's one of those lost labels that people hound like ESP, and I've been completely unaware until now. Might be the case, there's only one copy of this record on Discogs right now and it's going for $25. Oh man, I just realized the Charles Ives record above is also on CRI!

That was all the really cool stuff in the pile, but I also grabbed another copy of Stravinksy's Rite of Spring/Firebird LP in case the one I already have is really beat... I seem to recall that it is. At some point I'll A/B'em. Also, I'll grab any Bach LP, because I love all Bach, though it is rare with these mass-market cheapo travelling-salesman Bach LPs to find instrumentalists with real Casals-level soul interpreting that sacred geometry. Also grabbed this Antonin Dvorak From the New World LP on Deutsche Grammophon, because for some reason the cover photo gave me weird mild #scifivibes (pictured below, not my copy). The music unfortunately did not follow suit; this was composed in 1893, and it's strictly pre-modern classical pomp to my ears. 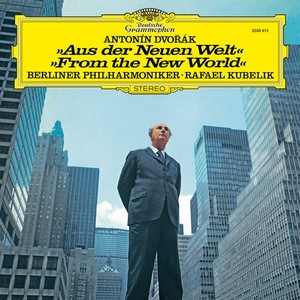