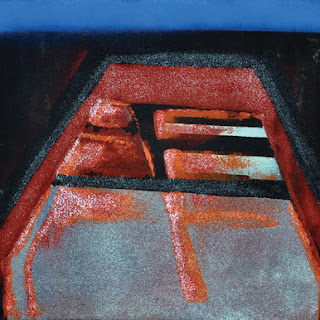 Pacific NW instrumental guitar rock built on African rhythms, as well as more diasporic rhythms like rock and techno, with Derek Monypeny's guitar ranging in between the two, at times very post-diasporic in its no-wave skronk, but also working its way back to the motherland with riffs that groove & blare like Konono Nº1 (the first track "Piece 14 (LPPZ)"), to North African/Turkish guitar taqsim (the second track "Piece 12"), and of course all bets are off when the taqsim builds into full-on blasting heavy Sabbathian/American desert stoner rock. The rhythms are by Kyle Emory and Steven T. Stone, who both have the same credit: "Drums, percussion, flute, electronics." (The flute and electronics are both excellent as well.)

ALTO! s/t LP (RAHEEM RECORDS) Literally 20 seconds ago I ran across a tweet on Twitter saying something like "There is no such thing as a good band whose name ends with a mark of punctuation." Oh yeah, it was the Chunklet twitter. He got some responses and the only consensus exception to his rule seemed to be Neu!, with one vote for Spacin'. To this very short list of exceptions, I would like to add Alto! (And, I should point out, I don't mean that in an exclamatory fashion.) They're from Portland, Oregon and Derek Monypeny plays guitar; we've liked his work for some time now (see here and here, no further disclosure forthcoming, neither full nor partial). He's joined here in a unique trio formation by two dudes who both play both trap kit & electronics, or as the Alto! bandcamp succintly puts it, "two drummers, one guitar." The three of them use this lineup to make minimalist avant-garde oft-atonal groove music... at the beginning Monypeny is barely playing guitar at all, and the first real maximal non-drumming sounds we hear could well be electronics, coming from one or both of the drummers. But it's not like Monypeny is absent -- he's just at rest, until the music might need it, and when it does he reveals a few nice modes of attack, anything from your basic Chicago-school Tar/Albini heavy machinery to high-end lead lines time-coded with sly Santana-isms. And all the while the drummers keep things moving, in an almost Reichian/Haywardian fashion...