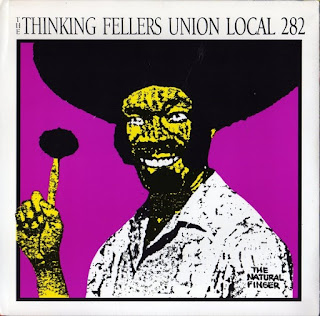 Speaking of the Thinking Fellers... man, they were a hell of a band. So often they teetered on the brink of 'wacky' and 'quirky', things I usually don't like (okay, so often they WILLFULLY TOOK THE LEAP AND PLUNGED DEEP INTO 'wacky' and 'quirky'), but they were such a viciously good band at good ole PLAYING and SINGING, that it never truly mattered. And, they really knew how to arrange three guitar parts at once, giving their music an always-surprising orchestral wallop. I always felt a special connection to them as well because they were originally from my home state Iowa, and they really did exemplify that state's particular twisted, dry, and frankly stupid sense of humor, which I had also been cursed with. Anyway, my single favorite song by the Fellers is the first one on this here EP, released waaaaaayy back in 1990. (Yep, that's over 25 years ago.) It's called "Hell Rules." It starts with the title, another one of those sardonic/bitter post-pigfuck 90s-indie koans, and then continues into the truly beautiful and haunting music, in which forlorn intertwining African High Life guitar lines delicately cycle around, lonesome in the void, a drum kit is replaced by spacy and intermittent hand percussion, and the vocals alternately sound like someone mumbling in another room and a goddamn choir of angels reminding you that, yes, "Hell Rules." "Narlus Spectre" is another Fellers classic, a loping folk-rock number with spaghetti western guitar parts and high-lonesome cowboy vocal melodies. Because, if there was a cowboy in the TFUL282 universe, of course he would be named Narlus fucking Spectre. "Leaky Bag" is a bit of a rager, and even with their twee vocals and derptastic humor, this band could fucking rage. EP closer "Misfits Park" also rages, with a particulary nasty guitar solo; it also has a 'quirky' ska upbeat in the bassline, and you just know at least one of these people non-ironically played Two-Tone Ska at some point (just like their idols in Souled American used to), and EVEN THAT doesn't bother me.