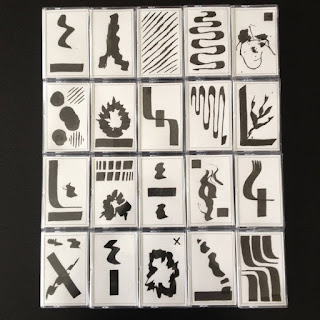 Limited run of 20. Entire run pictured above. Bottom row center is the copy now sitting in my house!

Hey, it's another #softunderground tape release from the American soft underground! In fact, this tape is by Hastío, aka PN of Seattle WA, the only other person to ever use the term #softunderground besides me, and of course radio and Twitter's own Jeff Conklin, who actually coined the term and then promptly stopped using it as soon as he noticed a couple of other goofballs had joined in. (Hey, can't say I blame him!) Thankfully, Mr. Conklin still plays lots of music in that style and several others on his weekly radio show on the Best Radio Station in the World, New Jersey's WFMU. He has in fact played this very Hastío tape. It features acoustic & electric guitars, electronics, spacey percussion, and wordless lost moaned vocals. You may have heard combinations much like this before from the post-2000 psych underground, but this one really leans heavily on the guitar. In fact, it's often unaccompanied, with a distinct Latino/Spanish melodic sense which is reflected in the Spanish-language album title and track titles like "Un presentimiento vago y pasajero de triunfo..." Throughout, there is lots of space, lots of silence, lots of pause for reflection, and even a few sections that could pass for a flamenco record on 16 RPM next to a healthy water heater. My favorite track is side one closer "El trueno en la ciudad," which eschews the atmospheric overdubs in favor of simple one-take lonesome zonesome heavy folk strumming. (The title means "Thunder in the city." Which is heavy.) [hastio.bandcamp.com]
Posted by Larry at 7:20 PM