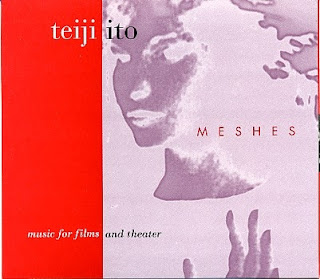 Been awhile since I've listened to the music of Teiji Ito; might even be since the last time I watched a Maya Deren film, which I haven't done since at least the year 2000. (It's okay, they're pretty etched into my brain.) Right now I'm listening to Ito's 32-minute piece "Axis Mundi," and for the first time I'm listening to it from a post-Don Cherry/Organic Music Society perspective, as I had not heard that particular Don Cherry music until the mid-2000s. This is a very interesting perspective; I think Teiji Ito is one of the very few people even close to being on Don Cherry's level as far as what became 'world music' concepts go. Plenty of evidence on the CD Meshes: Music For Film and Theater, which was released in 1997 by the ¿What Next? label. And right now, you can get the damn thing for under $10 on Discogs. CDs are still cheap, so go buy it, because why on earth would you want a 32-minute track released on vinyl instead of CD? Broken up into two sections, separated by a record flip, when you can just sit back and hear the whole thing uninterrupted? In addition to all 32 minutes of "Axis Mundi," which was composed and performed for a 1982 theater production in Baltimore (Mr. Ito sadly passed away later that year at the young age of 47), it includes his late-1950s soundtracks for two classic Maya Deren films, Meshes of the Afternoon and The Very Eye of Night (the entirety of the former and beautiful scenes from the latter handily embedded below via YouTube technology, with Ito's music in full effect).

Ito went on to marry Deren in the year 1960, but unfortunately she passed away in 1961 at the tender age of 44. It is worth noting that the music Ito was making for Deren's films predates Don Cherry's similar music by basically a decade. Of course, the very Cherry-like "Axis Mundi" was recorded almost 10 years after the Organic Music Society album, so it goes both ways. At the same time, Ito's music is also very Sun Ra-like in the late 1950s, at a time when Ra was just starting to scratch the surface of non-canonical instrumentation and open-form improvisations utilizing Asian concepts of silence. (Mr. Ra appears to have been paying attention to Deren & Ito, as his 1973 film Space is the Place drops a huge reference to Meshes of the Afternoon within its first 5 minutes.)

This is another YouTube of Ito's music, not for a Maya Deren film, but recorded in 1964 for a Japanese film production that was never released. In 2007, Ito's score was released on CD as Tenno by the Tzadik label. (That one goes for a little more money, a whopping $11.99!) It's a little more similar to the "Axis Mundi" feel than the Maya Deren works: