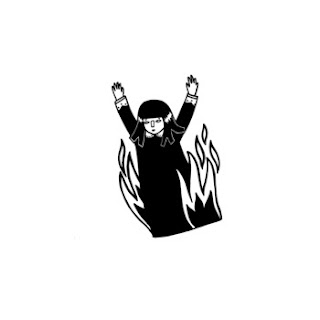 It might be true that everything is now on the internet, but that doesn't mean you're going to find out about it any faster. Way back in 2009 I was sent a tape of free-improvised acoustic guitar folk music by Cooper/Jones/Nichols, aka Sophie Cooper, Kelly Jayne Jones, and Pascal Nichols. I really dug it and was always interested in more from those responsible; next thing I know it's six years later and I hear about a new solo album by Sophie Cooper called Our Aquarius. I find it on Bandcamp and start listening obsessively, eventually noticing that it was released over a year ago. Oh well, better late than never; this is a fantastic album. As much as I loved the ramshackle homemade goodness of Ms. Cooper's earlier cassette, this solo work of hers is waaaayyy beyond. Those were improvised and cheaply recorded acoustic guitar & percussion room-jams, where these are songs and experimental instrumentals that are built up from carefully layered overdubs that are very well-recorded indeed. The result is what might be called a 'psychedelic folk' album, and sometimes it totally is, but it's also sometimes a noise album and/or a drone album, and sometimes it's a sui generis album, which is the best generis of all. The tracks have many layers and each one carves out its own deep territory. It's not until the 3rd song "Klias Wetlands" that we get true femme-sung psychedelic folk, and it's a doozy, a haunting number sounding like something the lady (ghost?) (hallucination?) across the lake in The Innocents might sing. There are two more relatively 'normal' folk songs on the album, the three of which would make a great EP/single release in themselves, but they sound even better surrounded by her deep instrumental work and heavy tone poems. Released as a CDR, in a beautiful possibly-hand-made wallet-thing with lyric insert, on the Wild Silence label, which is run by French musician Delphine Dora, whose work is worth serious investigation as well, among it a haunting collaborative release with Ms. Cooper.
Posted by Larry at 4:16 PM