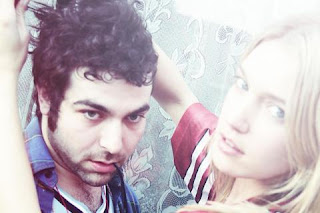 Wow, this is like the "punk" edition of Blogstitude! Look at all of this "shitgaze" I listened to today! I must say, it had been quite some time since I'd last caught up with early 'gazers Psychedelic Horseshit. I raved about their 2007 (debut?) 7" Who Let The Dogs Out? here, but later that same year their debut full-length Magic Flowers Droned hit me wrong and I've barely listened to 'em since. Of course, I loved bandleader Matt Horseshit's legendary 2009 live-at-SXSW interview with the Washington Post, not only because it was really funny, but for truly important insights (here uncensored!) like "The Velvet Underground, that shit is clean. That is clean as shit! "White Light/White Heat" is a fuckin' album of beautiful, clean static. Clean fuckin' static. That's how it sounded in the room." This statement coincides very well with another one, by Bruce Russell of the Dead C, that I came across today in issue # 2 of Mountain Fold Music Journal (the first three of which are generously offered here as pdf files): "We aren’t lo-fi in the sense that we rely on crap recording to saturate our sound. Our sound is fully saturated in real life." Horseshit and Russell (now there's a law firm I need to put on retainer) are talking about the same thing, the primal distorto-rock weirdsound of the instrument and/or ensemble in a room before it hits the tape. Horseshit calls it "clean static," Russell calls it "fully saturated," and I call it "blastitude" (not really, though I sometimes do call it "primal distorto-rock weirdsound"). In the case of Psychedelic Horseshit and the Dead C and quite a few but not enough others, what ends up being called "lo-fi" is inherent to the music itself and to the people and instruments playing it, regardless of recording studio quality, thus becoming no less than another kind of soul music. Which brings us to these two recent works by Psychedelic Horseshit that I listened to "preview copies" of today after reading a compelling review of Acid Tape in the Negative Guest List fanzine. After one listen I can confirm that Mr. Horseshit is walking it like he talks it; the recording itself is indeed very clean, not lo-fi, and the music he/they are making is indeed way beyond shitgaze, inventing its own unnamed subgenre. I listened to Acid Tape first, and it actually does come on like extended trip music, continuous crossfaded tracks with titles like "Unseen Void" into "Modern Daze" into "Hard As It Gets (Chill Sax Mix)", the last of which actually features some killer live heavy roots reggae kit drumming, which VERY few modern artists comparing their music to "dub" can claim... A few more tracks with titles like "Tired Bluez" and "Gliderz" sprawl out in non-linear fashion and then the album wraps up with a 7-minute ballad that seems to reach for The Clean's "Anything Could Happen" and gets much closer than you'd think it might. It's a trip, and it might not even be a bad one! After Acid Tape, I had to check out Laced, their 2011 debut full-length with the relatively high-profile label Fat Cat, and wow, this record really is 35 minutes of top-notch free-flowing electro-acoustic mind-fug, and, despite weird interludes and constant unlikely/deconstructed combinations of guitars/keys/drumboxes/pedals that are more of a laptop/glitch approach than a rock band approach, it remains an album of thoughtfully composed songs. Or, everything I just wrote could be summed up by the seven-word description on their SXSW page: "drug-fueled sample jam band/ future dub band," (Um, the comma was theirs, not mine.) In fact, they play SXSW this Saturday, March 17th, 7:45 PM at the Sony Club @ Red 7! That's tomorrow night!

Great 7" by Bed Wettin' Bad Boys. Both the band name and cover photo are humorously funny, but the four tunes that follow are perfect strangled/yearnin' basement grunge anthems, loud and gnarly, desperately melodic, pitched somewhere between sundazed and decrepit. And hey, I wonder how this genius-sounding 2010 experiment in the barter system went? From there into the righteous banjo/guimbri/percussion protest rock of Morocco's heaviest band, Nass El Ghiwane. Thanks to D. Monypeny for turning me onto these guys in this article for Blastitude. Wow, Pink Reason sure are pushing things with his/their second full-length Shit In The Garden. First song sounds like the kind of cavernous melancholy basement crunge you've come to expect from him/them, but it's overlaid with some sort of frantic too-loud shitty breakcore beat. Next level! The song underneath sounds awesome, and the fact that it's completely ruined by lo-fi digital breakcore somehow turns out to be awesome too. After that, no more breakcore, just more of that fine Pink Reason depression-gaze, not as flawlessly monolithic as it was on his first full-length Cleaning the Mirror, but surprisingly close, considering that it's been a few years, he's a stylistically unpredictable artist, the potential of a sophomore jinx, etc. The closing duet for stark banjo and microphonic feedback is especially well done.
Posted by Larry at 10:18 AM