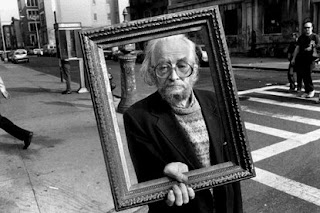 As a follow-up to the recent retweet linking to the films of Harry Smith on Ubuweb....

I've been reading this book Aquarius Revisited by Peter O. Whitmer (Citadel Underground paperback, 1991, purchased at Myopic Bookstore), impressionistic and mildly gonzo journalism profiling Burroughs, Ginsberg, Kesey, Leary, Mailer, Robbins, and Thompson, "seven who created the Sixties counterculture." I usually grab any Citadel Underground title I come across, and this one's a good read. Plenty of anecdotes and off-the-cuff quotables from the very-quotable subjects. You can currently get a copy online for one cent, it's totally worth it. (The Citadel Underground of Gulcher on the other hand is a little more collectibly priced. It starts at $4.55!)  To tide you over, here's an interaction Whitmer has with the one-and-only Mr. Smith while the latter is crashing at Allen Ginsberg's apartment sometime during the 1990s (pp. 145-6):

Harry, now in his late sixties, never mentioned that he was the first person to record Charlie Parker or that he recorded and edited the classic Anthology of American Folk Music. He was excited about his current project, which involved a new way of "listening to the world." One microphone is stuck out onto the street side of the apartment and another is stuck out onto the more peaceful courtyard side in a sort of urban stereo.

"Then what I do," Harry said, knocking his cigarette ashes into the ashtray like a Gene Krupa rim-shot, "is take all the sounds and speed them up so I can edit them. I have found surges in sound, punctuated by a single bird call or a single dog bark, that are pure beauty. These surges -- these waves of energy -- are really fascinating. So far I have recorded during two full moons and a summer solstice -- about one hundred twenty hours in all."

I asked Harry what was the best way to listen to it, meaning should you use earphones, or maybe it should be heard in a huge indoor auditorium, or . . .

"I'd say with heroin," he replied. "That's probably the best. After all, it is one hundred twenty hours."